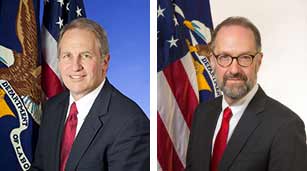 Although Assistant Secretary of Labor David Michaels is frequently identified as the drive behind OSHA’s enforcement and regulatory emphasis for the wireless construction profession, Deputy Assistant Secretary Jordan Barab continues to champion the need to focus upon the industry, most recently, touching upon the thorny topic of when a subcontracted worker is injured on the job, who is ultimately responsible?

At a session yesterday morning at the American Industrial Hygiene Association conference in Salt Lake City, Barab and David Weil, Administrator, Wage and Hour Division, USDOL, discussed the “implications of a fissured workplace.”

Barab used cell tower construction as an example in covering the topic, implying that if a worker dies after falling from a carrier-owned cell tower, it would be easy to presume that the carrier is responsible. But he said this is seldom the case however, as the carrier typically hires a sub-contractor to handle the hiring of those workers.

Barab didn’t discuss whether the carrier should be responsible, and if there is a move towards strengthening the Multi-employer Work Site Doctrine, which was restored by the Eighth Circuit when Barab was OSHA’s Interim Assistant Secretary in 2009.

Although OSHA’s recent Request for Information which ends June 15, 2015, is generally regarded as a pathway for regulations, Barab is the only OSHA official who has said this is the first step in what will likely become a regulation.

During the April 28, 2015  Workers’ Memorial Day commemoration in Washington, Barab discussed the wireless construction industry as did Kathy Pierce, the mother of Chad Weller, 21, who was killed last year in a fall from a 200 foot tower.