To celebrate the 50th anniversary of the antenna that stands atop of it, the Empire State Building will be lit in blue and white on Oct. 29, 2015. The Empire State Building and the Audio Engineering Society (AES), in conjunction with the Society of Broadcast Engineers, will host an informative presentation covering the technology and the techniques of the first and current combiner master FM antenna that serves the number- 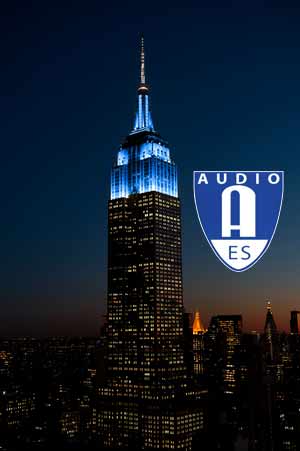 one market in the United States.

The Empire State Building is not only one of the most iconic buildings in the world, it’s capped by one of the most significant technological innovations in broadcasting – the Alford antenna, the master FM antenna that was erected nearly 50 years ago to serve the area’s broadcast market – the largest in the United States by audience size.As the AES recognizes this milestone with a special 50th Anniversary celebration, a rare honor will in turn be bestowed on the AES, as the building is lit in the signature AES blue and white to acknowledge the opening of the 139thInternational AES Convention and its remarkable members, engineers and audio experts who continue to innovate.Before the Alford antenna ringing the Empire State Building’s 102nd floor observation gallery went into service on Dec. 9, 1965, only one station at a time could broadcast from one antenna at a time. The invention of the combined master antenna system embodied in the Alford antenna allowed multiple radio stations to broadcast from a single antenna array, saving space and cost and marking a revolution in FM broadcast technology. Today’s combining systems have improved over the last 50 years and now accomplish superior propagation of radio signals to the largest listening audience in the US.The Alford antenna was the model for subsequent master antenna sites in Toronto, St. Louis, Houston and Minneapolis-St. Paul, and eventually even back at the Empire State Building, where a new master antenna system was commissioned in the 1980s. The original 1965 Alford antenna continues to serve as a backup and was pressed into service after 9/11 to provide emergency replacement antenna capacity for stations that were displaced from their World Trade Center sites.  Today, the new Master FM antenna systems reach the most listeners anywhere in the world, and is the largest sophisticated FM combiner in the western hemisphere.