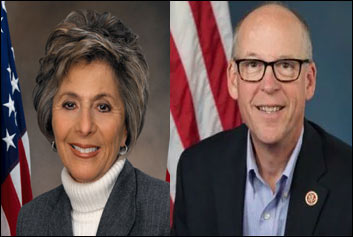 Broadband Conduit Deployment Act of 2015, commonly referred to as ‘dig once’ legislation. This bipartisan, commonsense legislation would mandate the inclusion of broadband conduit—plastic pipes which house fiber-optic communications cable—during the construction of any road receiving federal funding if there is a demonstrated need for broadband in the area within the next 15 years.

“Today our information highways are just as important as our interstate highways,” said Eshoo, who introduced similar legislation in 2009 and 2011. “By laying broadband conduit during construction of roads that receive federal funding, broadband providers can later install fiber-optic cable without costly excavation of newly-built roads. ‘Dig once’ is a commonsense bipartisan policy that will significantly reduce the cost of broadband deployment in our country.”

“Paving the way for smoother deployment of state-of-the-art-broadband networks has long been a goal for our subcommittee. This legislation meets that goal and makes it easier to connect more Americans to this vital 21st century resource,” said Walden. “Whether seeking information, connecting with friends and family, or finding new customers or businesses, the Internet is the critical backbone of our digital economy. We have seen the great impact it can have on job creation and economic development. This legislation will help ensure these benefits spread even further.”

The cost savings are significant. The Federal Highway Administration estimates it is ten times more expensive to dig up and then repair an existing road to lay fiber, than to dig a channel for it when the road is being fixed or built. According to a study by the Government Accountability Office, ‘dig once’ policies can save from 25 to 33 percent in construction costs in urban areas and approximately 16 percent in rural areas.

Eshoo concluded: “The 2012 Executive Order represents an important endorsement of ‘dig once,’ but states need more incentive to implement this commonsense policy.”

“PCIA commends Chairman Greg Walden and Ranking Member Anna Eshoo for introducing bipartisan legislation to facilitate broadband deployment. Their bipartisan bill recognizes the clear nexus between economic growth and broadband. Given the capital intensity of building broadband networks, taking full advantage of existing highway construction and repair will advance broadband deployment in a smart and efficient way. PCIA supports this bill and looks forward to working with its sponsors and with Congress toward getting it enacted,” Adelstein said in a statement.