Another adjustment they should consider is providing their Commissioners with research that they’ve unearthed to provide direction rather than having them rely upon a speechwriter’s frenzied Google search. 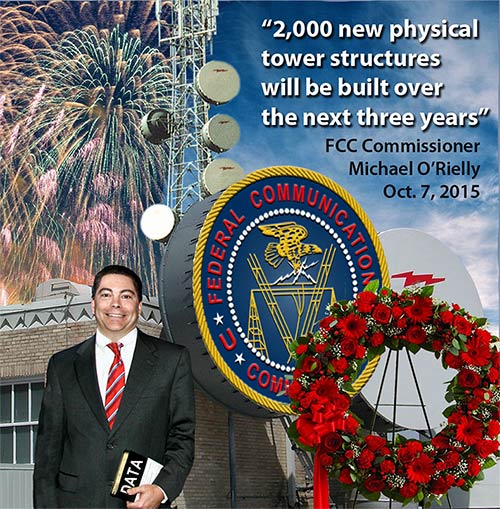 FCC Commissioner Michael O’Rielly’s highly questionable estimate that only 2,000 new towers will be built in the next three years would be welcome news if one company was the sole provider, but the projection would appear to be a death knell for the rest of the industry.

In discussing the need for co-locations to reduce the requirement for additional towers, O’Rielly said, “It has also been estimated that 2,000 new physical tower structures will be built over the next three years, and this number does not include small cells and building locations, which could reach the tens of thousands.”

Although O’Rielly didn’t identify in his speech where his data came from, if it’s an FCC Commissioner offering research with conviction, then it must be valuable information to run with, and the media did just that, immortalizing it as gospel to be churned forever.

Gloomy outlook is not fact based
Hopefully, contractors and other infrastructure providers didn’t start handing out pink slips this week and change their business models based upon what three tower manufacturers told Wireless Estimator was a rather depressing and seemingly incorrect outlook for the industry that, according to O’Rielly, averages out to only 13 towers being built in each state every year.

So where did these illuminating new tower build numbers come from?

O’Rielly was using a research report from a stock analyst who, for the first time in June of this year, initiated coverage on American Tower Corporation, Crown Castle and SBA Communications.

Although there are a number of analysts that dig deep into wireless infrastructure needs and how they could affect earnings of tower companies, oftentimes they are also clueless in regards to new builds and other carrier requirements since capex can be switched at speeds that would make a three-card Monte street hustler blush with envy.

“I have no idea where they pluck these numbers from,” said a sales manager of a major tower manufacturer. “We struggle with them all of the time to assist us in making projections and it’s a daunting task. We’ve got the sales boots on the ground with carriers and tower owners and their projections aren’t always on target and change from day to day.”

But an FCC Commissioner should go further when helping to set a course for the nation than relying upon a stock broker’s gaze into a hazy crystal ball. Especially if it’s the analyst’s first time at the plate with no batting average. The same analyst that gave ill-advised first-time coverage advice that folks should bet the ranch in 2000 on Qualcomm since it would double in price even after it had a 2,600% rise the year before. Qualcomm tanked 58% within a year after his call.

Tower count should be higher
A vice president of another tower manufacturer said it’s difficult to assess how many towers would be built every year, but “If you include DAS towers, I would say the figure would more likely be 1,500. That’s purely a guess on my part which I came up with by estimating our market share and the amount of structures we’ve produced.”

One more executive of a tower manufacturer believes that O’Rielly’s tower count is “weak at best” and could be double the amount or more.

“It was slow this year, but we’re starting to see a fairly nice increase in RFPs which is a good sign for Q1,” he said.

O’Rielly’s factor falls flat
Trying to identify how many towers will be built in the next three years or to compile accurate statistics for those built is a herculean and perhaps insurmountable task since there is not a national database available for analysis of building permits.

In addition, carriers, non-public tower owners and others building the structures keep that information close to their vest.

However, O’Rielly’s annual projection of 666 new towers a year falls flat when one considers that, according to their 2014 annual report, American Tower alone built over 600 towers last year as part of their build-to-suit program.

In a more pragmatic approach to why 666 towers a year is too few, there are 19,509 incorporated communities in the U.S. Therefore, using O’Rielly’s factor, only one in 29 communities will get a new tower this year. That is if not one new tower is built in unincorporated areas which represents 37% of the nation’s population, according to the U.S. Census Bureau.

For a higher elevation view, in metropolitan areas with an average population of 712,000, according to the Commissioner, there will only be 1 ¾ towers built for each of the 383 metro areas.

The FCC should invest in hiring researchers, but as O’Rielly said in a September speech, one of six he’s done in the past four weeks, “One difficulty is that Federal hiring practices make it easier to hire lawyers.”