Federal Communications Commission Chairman Tom Wheeler committed today to a March 29, 2016 start date for an incentive auction of 600Mhz wireless spectrum now under the control of the nation’s broadcasters. 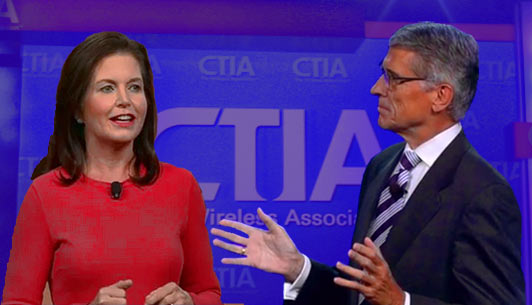 He told a packed audience at CTIA Super Mobility 2015 that the auction, which he described like a Swiss watch with many moving parts, has never been done before, but he’s confident that it can be pulled off with the voluntary participation of broadcasters.

The auction, already delayed by two years, will move forward, Wheeler said, on a timeline that will allow input from broadcasters as well as from carriers that would be the auction’s potential spectrum buyers.

The FCC plans to issue a new public notice in October that will give further details on the planned schedule. The FCC chief said that around Thanksgiving, broadcasters will be able to indicate whether they want to participate in offering up the spectrum they use today.

By the time the next CTIA show rolls around next year, “we will have concluded a successful incentive auction” and a process will be in place where 600 MHz spectrum will be available for new services, Wheeler said.

Battle of two CTIA Prexies
Wheeler was introduced at the keynote session by CTIA CEO Meredith Attwell Baker, who accused the FCC of not having long-term plans for freeing up additional spectrum. “After next year’s broadcast auction, there is no plan” for more spectrum, she said.

Wheeler, a former CTIA president himself, said he disagreed with Baker’s assessment, stating that there is a plan when it comes to getting spectrum beyond the next auction.

He said the U.S. was the world leader in 4G and “we’re going to maintain that in 5G,” he said.

“There is nothing in our rules that will stop 600 MHz from being used for 5G,” Wheeler said.

Verizon made 5G a hot topic during the first day of the show when they announced earlier this week that they would be doing field trials next year and possibly having limited commercial use in 2017.