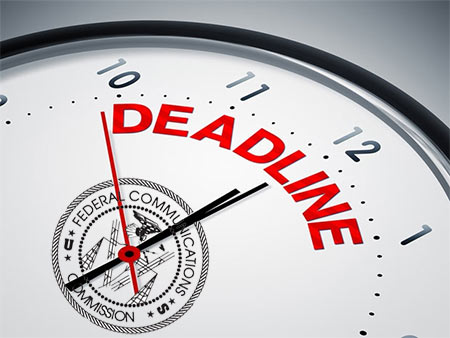 The study concluded that the Commission’s three-month window for filing for construction permits falls well short of the actual time needed to submit and process the applications for the 860 to 1,164 stations that will likely be required to move to new channels. The study estimates a time frame of 12-18 months. It identified in a worst case scenario that it could take 11 years.

The report also states that it is not possible that an industrywide transition of such a large number of TV stations to new channels can be completed in the three-year window currently required. In fact, the study’s research and analysis estimates a far greater amount of time to accomplish the transitions.

Digital Tech’s study forecasts that, at best, between 297 and 445 stations can complete the required tasks in that time period, assuming normal conditions. which concluded that “under ideal conditions, as many as 445 stations can be relocated to new channels within 39 months,” when as many as 850 to 1,150 stations may need to be repacked.

The report also took to task the FCC’s Widelity Report, stating that their case studies are for an individual station type and does not take into account how the amount of resources available to the entire industry in a compressed amount of time will impact those timelines.

Tower crew shortage is a primary concern
The report said the two most significant bottlenecks in completing the repacking in 39 months currently allotted by the FCC will be the small number of qualified crews available for completing tower modifications and installing antennas, and transmission lines, and a shortage of antennas.

Other possible delaying factors included the time required for obtaining zoning and building permits, negotiating tower lease modifications and dealing with the bureaucracy associated with federal and state-owned lands where some broadcast towers are located.

The report identified that there are only two industry-accepted manufacturers for broadcasters and the companies that formerly built out the digital TV transition are no longer in business.

“The vast majority of broadcast towers are owned by the broadcasters, themselves, and most of these towers are not TIA-222G compliant for tower safety code. Therefore, DTC anticipates that there will be a significant number of towers that will require modifications to meet code. These modifications represent both a high-cost and lengthy time component of a channel change project,” the report noted.

Safety takes a back seat in the study
Noticeably absent in the report was a concern about worker safety as limited crews would be taxed in completing the schedule in 39 months, and new crews that would be formed would not have the expertise for the additional disciplines required for working on broadcast structures.

Members of the National Association of Tower Erectors (NATE) have voiced their concerns in the past that the FCC’s ambitious deadline could result in an increase in fatalities.

In correspondence to the FCC in 2014, the association said, “…the FCC and its intervention are likely to promote a scenario in which under-trained and unqualified individuals and contractors will seek to reap the rewards of over a billion dollars of channel relocation dollars. This will undoubtedly lead to an increase in accidents and fatalities similar to what occurred in 2006 as more and more contractors rushed to take advantage of TV stations’ need for tower-related services leading up to the 2009 analog sunset.”

NATE stated that broadcasters will be faced with limited tower crew options and “the risks inherent in using an unqualified tower contractor cannot be over-emphasized.”

The full Digital Tech Consulting report can be viewed here.

CTIA says it doesn’t want the repack stretched out
Scott Bergmann, VP of regulatory affairs for CTIA says the industry opposes any effort to stretch out the repack.”The success of the auction assumes carriers will bid substantial sums, and that cannot happen absent certainty that they will receive timely access to the spectrum purchased.

“The FCC’s current repacking process is fair and achievable for the broadcast industry, has been affirmed by the D.C. Circuit as reasonable and even extends six months past the timeline suggested by NAB in its own proposals to the FCC during the rulemaking process.”

NAB’s statement to the FCC asking for a deadline following the auction
The NAB filed the following comments to officials at the Federal Communications Commission:

“Commission officials have noted on many occasions that the commission will not know how many broadcasters will be required to relocate until the auction is complete. In light of this fact, the commission’s one-size-fits-all deadline is manifestly unreasonable; clearly, the deadline for repacking 200 stations should not be the same as the deadline for repacking 1,200 stations.

“The draconian consequences for failing to repack within the commission’s deadline only compound this problem. The commission should therefore establish the deadline immediately following the auction, at which point it will know exactly how many and which stations must relocate. This will allow the commission to oversee an expeditious and successful transition in the 600 MHz band.

“In May 2014, the commission determined in its Incentive Auction Framework Order that every broadcaster required to relocate as a consequence of the auction must do so within 39 months following the auction’s completion.1 The consequences of failing to meet that deadline—regardless of whether the circumstances were within the broadcaster’s control—would be to force the offending broadcaster off the air, and deprive its viewers of free and over-the-air service.

“The FCC provided no flexibility in this rule; i.e., the commission did not develop a formal waiver process to address the circumstance where a broadcaster was unable to complete its move due to no fault of its own. The commission established its 39-month deadline based on the Spectrum Act, which permits the commission to reimburse broadcasters for costs associated with repacking up to 36 months following the conclusion of the forward auction. It did not ground the 39-month timeline in any data analyzing how long it might take to repack a large number of broadcasters across the entire country.

“While NAB understands the relationship between the reimbursement and physical repacking timelines, the commission has expressly provided for broadcasters to receive a “final allocation” of costs based on actual and remaining estimated costs prior to the end of the three-year reimbursement window.

“Indeed, in declining to require that international coordination be completed before the auction, the commission itself noted that this would not put border stations at risk for nonreimbursement because those stations could receive such final allocations for outstanding costs.

“Plainly, regardless of the statutory reimbursement deadline, the commission has the discretion to develop its repacking timeline based on the facts once they are definitively known, rather than an arbitrary deadline divorced from the task at hand. Depending on the number of stations that ultimately must move to new channels, the current deadline of 39 months may not be achievable.

“In a report commissioned by NAB, Digital Tech Consulting, Inc. concluded that, under ideal conditions, as many as 445 stations can be relocated to new channels within 39 months. However, if the transition requires more stations to repack, there is simply no way additional stations will be able to meet the current hard deadline.

“This is not a reasonable approach. Rather than simply establishing a new arbitrary deadline, NAB urges the commission to wait until the conclusion of the auction to set a transition deadline based on the scope of the nationwide repack. This would allow it to, for example, shorten the deadline should fewer stations than expected need to repack.

“It would also allow the commission the flexibility to extend the deadline should the commission need to repack as many as 850 to 1,150 stations, as previously released commission data has suggested.6 Under any circumstances, NAB believes that the deadlines should be aggressive but reasonable, designed to achieve a transition that enables successful forward auction bidders to begin operation while also ensuring a seamless transition for broadcasters and their viewers.

“Repacking the broadcast television band will play a critical role in a successful broadcast spectrum incentive auction. The spectrum the commission can offer wireless carriers in the forward auction will come not only from broadcasters’ voluntary relinquishment, but also from reorganizing the television band. It is critical that this process go smoothly to ensure that wireless carriers can commence operations in a timely fashion and broadcasters can successfully relocate to new channels with only minimal disruption to their viewers.

“The commission should eliminate the current, hard 39-month deadline, and instead work with stakeholders to develop a regional transition plan that will allow for the most expeditious, efficient repack possible once the auction is complete.

“At that point, it will be clear how many stations must actually move. The Media Bureau, which already has delegated authority to assign individual station construction deadlines, should assign those deadlines based on an ambitious, yet attainable, schedule that will ensure that no station is forced off the air due to circumstances outside its control. In any event, the commission should establish a well-defined waiver process to address stations that are unable, despite diligent efforts, to complete the transition by their assigned deadline.”

Auction rules are novel for the FCC
The incentive auction itself will actually be comprised of two separate but interdependent auctions — a reverse auction, which will determine the price at which broadcasters will voluntarily relinquish their spectrum usage rights, and a forward auction, which will determine the price companies are willing to pay for flexible use wireless licenses.

The lynchpin joining the reverse and the forward auctions is the “repacking” process. Repacking involves reorganizing and assigning channels to the remaining broadcast television stations in order to create contiguous blocks of cleared spectrum suitable for flexible use.

In order to be successful, each of the components must work together. Ultimately, the reverse auction requires information about how much bidders are willing to pay for spectrum licenses in the forward auction; and the forward auction requires information regarding what spectrum rights were tendered in the reverse auction, and at what price; and each of these depend on efficiently repacking the remaining broadcasters.