UPDATE – May 27, 2015 – According to Upper Merion Township Detective Andrew Rathfon, the technician was employed in the industry until September 2014 when he started stealing backup batteries from cell sites. In the past five years he has worked for World Link Inc., Clear Wireless, LLC, and Ericsson Inc. He was able to disarm tamper switches due to his knowledge of the industry and admitted to hitting Sprint battery cabinets the hardest, said Rathfon.
– – – – – – – – – – –
May 23, 2015 – Either Pennsylvania police or federal or state authorities are preparing to charge a telecom technician for what appears to be the nation’s largest backup power supply theft ever of more than 4,000 cell site backup batteries from over 500 tower compounds located in four states since September. 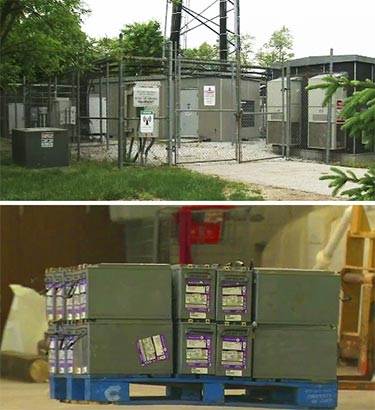 Following the investigation of the theft of batteries at this Upper Merion Township, Pa. cell site, a technician reportedly will be charged with stealing over 4,000 batteries through the Northeast. Many of the batteries had an Alcatel-Lucent label on them.

A hunch by an Upper Merion Township police detective cracked the case which had 40 to 50 other enforcement agencies investigating the thefts.

Detective Andrew Rathfon said the suspect’s name was not being immediately released since he hasn’t been formally charged. Wireless Estimator will provide additional details as they become known.

The thefts, ranging from North Jersey to Delaware, were accomplished by a technician employed in the industry, according to Rathfon.

“His experience in the industry and his knowledge of the gate access codes and tamper switches allowed him to go undetected for quite a while,” Rathfon said.

While investigating a local theft, Rafton on a premonition contacted a Philadelphia scrap dealer, Green Dog Recycling, since the company was known for receiving stolen material in the past. In January UMT detectives arrested two brothers for selling approximately a half million dollars of storm sewer grates to Green Dog for $9,000.

Green Dog’s owner, Michael Williams, acknowledged that he had purchased loads of batteries, estimated at 4,300, from the technician and had paid him $122,000, and provided the suspect’s name to Rathfon.

Williams also stated that he paid approximately $30 per battery. By Pennsylvania law, Williams was required to retain a copy of a seller’s drivers’ license as well as their photo and provide it to investigating authorities.

Although Rafton did not immediately have an estimate of the cost to carriers to replace the stolen batteries, last April in Houston, Tex., two men were arrested for stealing 500 batteries from cell sites and an AT&T spokesperson said that they were worth hundreds of thousands of dollars.

Sprint was reportedly hit the hardest and the carrier is currently doing an audit of its sites. Pictures of the stolen batteries recovered showed an Alcatel-Lucent label. A construction manager for a turfing contractor told Wireless Estimator that the batteries are approximately $600 each.

Almost all of the alleged thefts occurred outside of Upper Merion Township, so authorities there are hopeful state or federal investigators will take over the case. Pennsylvania State Police had been investigating a March 22 incident where 40 batteries from a Sprint site in Upper Macungie were stolen.

It might also allow those agencies to review whether or not Green Dog should have been aware that the large amount of batteries being provided by the individual were stolen and should have reported it to authorities.

A federal bill to prohibit and deter the theft of metal, S.394, making stealing and selling scrap metal from critical infrastructure a federal offense, in 2013 was not enacted. However, even it had been passed, the one size fits all approach might not have provided additional jail time for the UMT thief since batteries were not detailed in the bill.

Last September, an AT&T technician was arrested and accused of stealing cell site batteries from multiple sites in Mississippi. Authorities said that David Ezell was caught after surveillance cameras caught him in the act while taking them from a Jackson site.

The most expensive cell site thefts occurred in 2008 when a Georgia Metro PCS worker, Dwayne Horton, allegedly stole close to $6 million in circuit boards valued at $23,000 each from Metro PCS and Verizon Wireless compounds in the Atlanta, Ga. area.