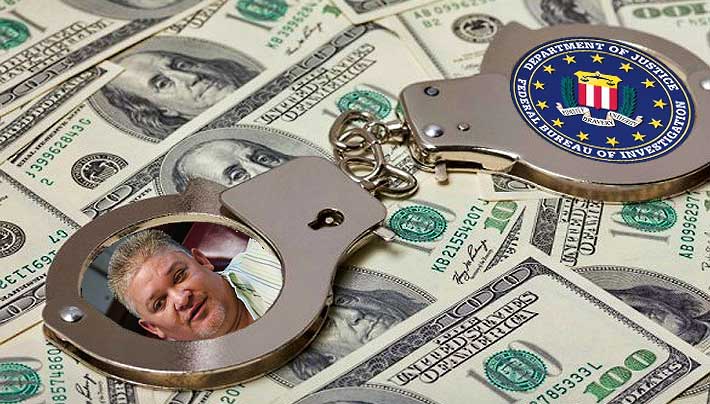 Victor M. Ortiz-Díaz, a.k.a. “Manolito,” mayor of the municipality of Gurabo, Puerto Rico, was arrested by Federal agents for extorting money to invest in a Ponzi scheme

The mayor of Gurabo, Puerto Rico was arrested yesterday on charges of extortion and soliciting a bribe for allegedly using his municipality’s money to invest in a $15 million Ponzi scheme that was structured around investors being able to reap handsome profits from their investments in FCC cell tower administration contracts.

According to the indictment, on or about October 2012, the Municipality of Gurabo owed an unnamed company payments for eight outstanding invoices for work performed in the municipality.  The co-owner of the business met with mayor Victor Ortiz-Díaz (aka “Manolito”) to discuss the outstanding debt.

The mayor solicited $125,000 from the contractor to invest in a FCC telecommunications project.

Because the contractor did not have the money to pay the $125,000, the mayor told him that he would have the municipality make a payment to the company for $196,643.

With this money, the contractor could cover the “loan” to Ortiz-Díaz, as well as pay other debts it owed its suppliers.

On Oct. 19, 2012, the contractor issued three post-dated checks payable to three different individuals, who were employees of Miguel A. Merced-Torres.

Unbeknownst to the mayor at the time, Merced-Torres, who is now serving a prison term, was orchestrating a telecommunications investment scheme where he used his MM Technology Wireless Group company to misrepresent himself as a representative of the FCC that was seeking individuals to invest money in exchange for the FCC’s issuance of cell tower contracts.

When victims began to inquire about delays in signing the cellular contracts, and after some victims requested the return of their money, Merced-Torres would have e-mails sent from an email account he had created, “fcc@mmtwgroup.com,” falsely representing that the emails were sent by FCC officials, according to his April 2014 indictment by the U.S. Attorney’s Office in Puerto Rico.

The emails provided false reasons for the delays in signing the cellular tower administration contracts, such as: 1) problems with the security clearance of investors and subsequent investigations by the FBI; 2) inadvertent notification of incorrect dates for the signing of contracts; 3) alleged electoral bans for signing contracts within the first 10 days of each month; 4) serious car accident involving the alleged FCC interim program administrator, who remained in a coma and connected to life-support machinery; among others.

To maintain the conspiracy, Merced-Torres would make partial payments to victims, under the representation that the money was a loan to the victim to ease his or her financial hardship caused by the delays, and under the understanding that said money would have to be paid back to the FCC prior to signing the contracts.

On May 13, 2015, Merced-Torres was sentenced to a term of imprisonment of six years, followed by three years of supervised release by US District Court Judge Jay A. García-Gregory.

If found guilty, Ortiz-Diaz could face up to 20 years in prison and $250,000 in fines.  An indictment contains only charges and is not evidence of guilt.

“It is always a sad day when someone who enjoys the trust of the people abuses that trust,” said FBI Special Agent in Charge Douglas Leff in a statement following Ortiz-Diaz’s arrest.

“It should be clear by now that those officials who have served the public dishonestly will eventually have justice delivered to their doorstep.  The FBI will continue to work with its partners at the U.S. Attorney’s Office to ensure that the citizens of Puerto Rico receive the fair and honest government to which they are entitled.”