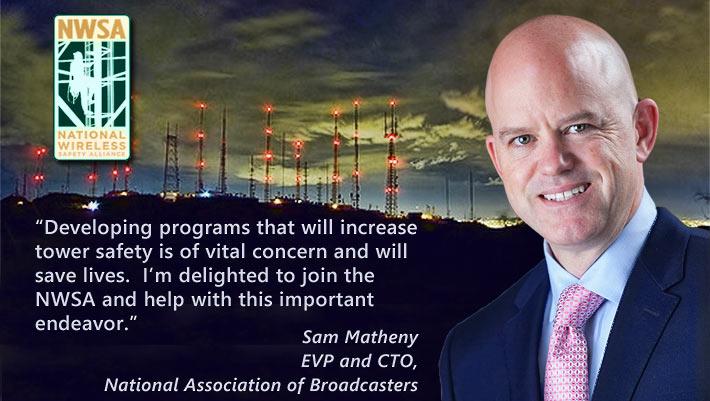 The National Wireless Safety Alliance (NWSA) announced today that Sam Matheny, Executive Vice President and Chief Technology Officer at the National Association of Broadcasters (NAB), has joined the organization’s Board of Governors. The organization made the announcement from NWSA stakeholder meetings that are being held in Dallas, Texas this week.

At NAB, Matheny leads the organization’s technology team in its efforts to promote innovation and propel broadcast technology into the future. He also provides overall leadership for PILOT, formerly NAB Labs, as well as NAB’s TV, Radio, and Digital Technology Committees.

Matheny is also a member of the FCC Communications Security, Reliability and Interoperability Council (CSRIC), a member of the Academy of Digital Television Pioneers, and he serves on the advisory board of Reveal Mobile, a mobile applications and advertising company he co-founded in 2005.

“The NWSA is ecstatic to welcome Sam Matheny as a member of the Board of Governors,” said Don Doty, President of the NWSA Board of Directors. “The NWSA’s certification programs are tailor made for both the wireless and broadcast industry workforce and Sam’s track record of innovative leadership in the broadcast and technology sectors will bring invaluable expertise to the organization,” added Doty.

“Climbing and rigging really tall broadcast towers to handle very large antennas requires special skills that are uniquely challenging,” stated Sam Matheny. “Developing programs that will increase tower safety is of vital concern and will save lives. I’m delighted to join the NWSA and help with this important endeavor,” added Matheny.

The NWSA’s Telecommunication Tower Technician I (TTTI) and Telecommunications Tower Technician II (TTTII) certification programs are slated to be launched in the marketplace in December of 2016. Other assessment and certification programs the NWSA will likely unveil in the future include Antenna & Line Foreman, Tower (Stacking) Foreman, Structural Modifications Foreman, DAS Systems, Small Cell Systems, Broadcast Structures and Outside Plant/Fiber to the Home and Business.