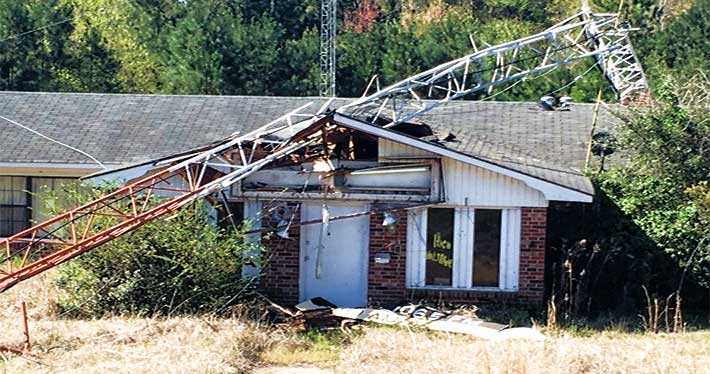 There were no injuries when this Georgia guyed tower collapsed yesterday, damaging an unoccupied building, but a tower developer says that it has been financially hurt after Cobb County, Ga. officials required it to to move its proposed structure to another location. Photo Courtesy: Screven County EMA

Tower developer Municipal Communications LLC took Cobb County, Ga. officials to court last week for having an “impossible condition” placed upon it for a new 190-foot monopole, when the county asked it to move the structure 300 feet – while in Screven County,  a tower decided to move hundreds of feet on its own when it collapsed yesterday.

Although there were no injuries when the guyed tower collapsed and blocked traffic on Highway 21 for a short time in the morning, Municipal Communications is  stating that it had been injured.

“As a result of the Defendants’ actions, Municipal Communications has been damaged irreparably and has no adequate remedy at law,” the company said in its 24-page complaint filed in U.S. District Court for the Northern District of Georgia.

According to the complaint, Cobb County granted Municipal’s request for a special-land-use permit (SLUP), but required the tower to be moved 300 feet to the east.

Municipal  is seeking an injunction directing the defendants to remove the condition and to allow the company to build its proposed tower at the leased and originally proposed site.

Municipal said that the county is asking them to move the tower off the site leased by it to another location that the company does not lease or control and that is unavailable to it.