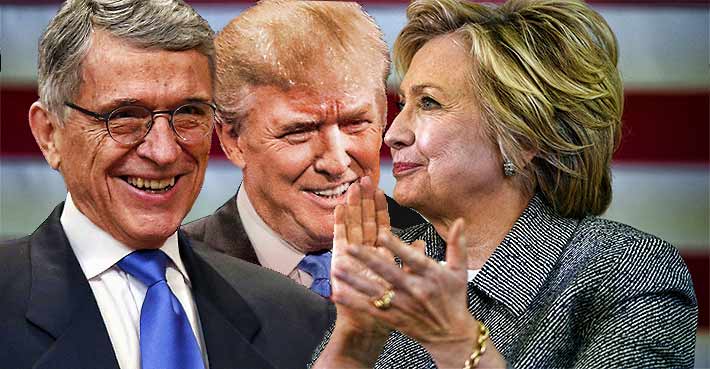 Hillary Clinton had a number of telecom positions. Victor Donald Trump has provided limited insight into his points and objectives. FCC Chairman Tom Wheeler, at left, whose term expires Nov. 3, 2018, could be relieved of his duties, or he might resign prior to Trump’s inauguration.

Trying to identify what Donald Trump’s election as the country’s 45th president of the U.S. will mean for the telecommunications industry is a daunting task since he has offered very few specifics as to how he will stimulate innovation and build out America’s infrastructure through re-purposing spectrum and supporting 5G through licensed and unlicensed spectrum.

Trying to research where he stands on net neutrality and other high profile FCC concerns as well as all other areas that will impact wireless infrastructure builders and suppliers will send one down a numbing rabbit hole.

Simply, he has not provided any details, except for his recent statement that he would block AT&T’s deal announced in October to acquire Time Warner for $85 billion.

However, Trump, who reels in deals, may take a more moderate view once he assumes office, as he did in last night’s acceptance speech.

AT&T CFO John Stephens today said his company was looking forward to working with Trump and “optimistic” regulators would approve the deal.

Trump will be meeting with President Obama tomorrow to work with the president’s team to ensure a peaceful transition of power.

One area that could be discussed is the continued service of Tom Wheeler, the FCC Chairman, although it is most likely not a high priority.

Like other federal positions, the chairman is appointed by the president and confirmed by congress. Wheeler, a democrat and an Obama appointee could be relieved from his position if he is not being considered by Trump’s transition team.

Wheeler was expected to stay in his job until the middle of 2017 if Hillary Clinton won the White House, allowing him to finish several controversial initiatives.

It is unknown if Trump would want him to complete the current TV broadcast auction or serve out his five year term which expires Nov. 3, 2018.

However, Wheeler, following the precedent of Republican FCC Chairman Kevin J. Martin, who put in his resignation beginning Jan. 20, 2009, the day that Obama was sworn into office, might also resign.

Trump hasn’t spoken out about FCC issues, but has railed against regulations that he believes don’t result in concrete economic benefits, such as the FCC’s new net neutrality rules.

In a campaign promise, Trump said that he would put a “temporary moratorium on new agency regulations” and “eliminate our most intrusive regulations.”

“We look forward to working with the next administration in support of a pro-innovation and regulatory reform agenda that will allow local broadcasting to flourish and reach every viewer and listener, anywhere and any time.”

US Telecom’s President Walter McCormick said, “We congratulate President-Elect Trump, and look forward to working with him and his Administration to advance his commitment to infrastructure investment – particularly as it relates to investment in advanced telecommunications networks and services.”

“This election cycle dramatically illustrated the critical role that broadband plays in our nation, providing millions of Americans an unprecedented ability to stay involved in campaigns for public office at the local, state, and national level – and enabling a new kind of citizen engagement in the democratic process. Policies that encourage continuing investment in this sector represent a path to prosperity, job creation, and economic growth.”

McCormick announced last year that he would be resigning from the broadcast organization at the end of this year after serving the association for more than 15 years.