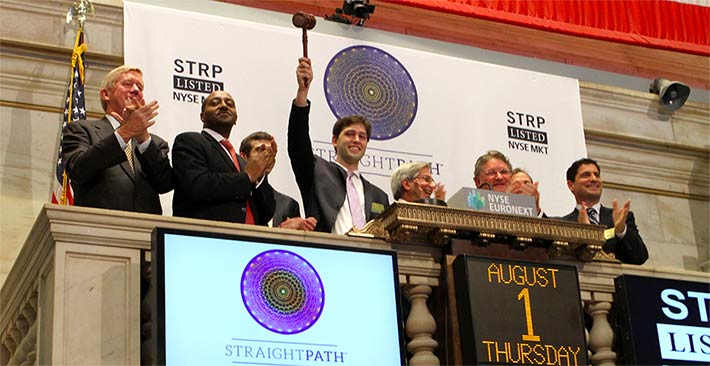 President & CEO David Jones rings the closing bell during Straight Path Communication’s first day of trading in 2013. The stock lost its luster near the end of 2015 when rumors surfaced about the FCC’s investigation. From over $40, it nosedived to less than $10. Today, at closing, the stock rose 31%, closing at $41.13.

The Federal Communications Commission’s Enforcement Bureau today announced a settlement valued in excess of $100 million with Straight Path Communications to resolve an investigation of Straight Path’s failure to deploy wireless services as required under its FCC spectrum licenses.

The Enforcement Bureau investigated allegations that Straight Path violated the Commission’s buildout and discontinuance rules in connection with approximately 1,000 licenses in the 39 GHz and Local Multipoint Distribution Service GHz spectrum bands. These high frequency bands have been identified by the Commission as extremely valuable for use in the next generation evolution of wireless technology or “5G.”

To settle this matter, Straight Path will pay to the United States Treasury a $100 million civil penalty, surrender to the Commission 196 of its licenses in the 39 GHz spectrum band, sell the remainder of its license portfolio, and remit 20 percent of the proceeds of that sale to the Treasury as an additional civil penalty.

“Squatting on spectrum licenses without any meaningful effort to put them to good use in a timely manner is fundamentally inconsistent with the public good,” said Travis LeBlanc, Chief of the FCC’s Enforcement Bureau. “Wireless spectrum is a scarce public resource. We expect every person or company that receives a spectrum license to put it to productive use.”

In November 2015, a pseudonymous source (“Sinclair Upton”) published a report alleging that Straight Path obtained renewal of its 39 GHz band licenses from the FCC by submitting filings incorrectly claiming that they had constructed systems that in fact were never built. The FCC requires license holders to use this licensed spectrum and verify that use in “substantial service” filings to the Commission. In July 2016, an internal investigation by Straight Path concluded that equipment had been deployed only for a short period of time at the original transmitter locations, and that no equipment was present at the time of this investigation at the majority of the relevant locations.

The Commission has established construction and discontinuance requirements, including licensing rules, to promote the productive use of spectrum, to encourage licensees to provide service to customers in a timely manner, and to promote the provision of innovative services.

As has been the case since its establishment as the Federal Radio Commission, one of the core missions of the Federal Communications Commission is to ensure productive and beneficial use of wireless spectrum. Thus, license holders are required to ensure that they utilize spectrum for which they were awarded a license in ways that adhere to the commitments made to the Commission.