By Art Pregler
It’s a bird, it’s a plane… it’s a Flying COW.  Despite its funny name, we expect our Flying COW will be doing serious, potentially life-saving things for our customers.

We’ve used drones to inspect cell sites, measure network strength in sports stadiums, and now we’ve built a Flying COW.  A Flying COW – which stands for Cell on Wings – is a cell site on a drone. It is designed to beam LTE coverage from the sky to customers on the ground during disasters or big events. 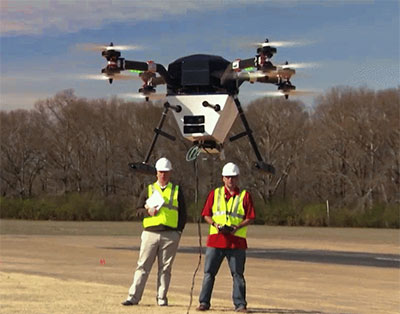 Successful test flights of a flying COW drone were made in rural Georgia.

Last week, our drone team completed what we believe is an industry first: A successful live test flight of the Flying COW transmitting and receiving high speed data above a field outside Atlanta.

Here’s how it works. The drone we tested carries a small cell and antennas. It’s connected to the ground by a thin tether. The tether between the drone and the ground provides a highly secure data connection via fiber and supplies power to the Flying COW, which allows for unlimited flight time.  The Flying COW then uses satellite to transport texts, calls, and data. The Flying COW can operate in extremely remote areas and where wired or wireless infrastructure is not immediately available. Like any drone that we deploy, pilots will monitor and operate the device during use.

Once airborne, the Flying COW provides LTE coverage from the sky to a designated area on the ground.

Compared to a traditional COW, in certain circumstances, a Flying COW can be easier to deploy due to its small size. We expect it to provide coverage to a larger footprint because it can potentially fly at altitudes over 300 feet— about 500% higher than a traditional COW mast.

Once operational, the Flying COW could eventually provide coverage to an area up to 40 square miles—about the size of a 100 football fields. We may also deploy multiple Flying COWs to expand the coverage footprint.

We see the Flying COW playing an important role within our Network Disaster Recovery (NDR) team. We can transport, deploy, and move it quickly to accommodate rapidly changing conditions during an emergency. For example, at the direction of first responders, it could follow firefighters battling a quickly moving wildfire line—keeping them connected while they fight blazes. The Flying COW is tough. It can fly and provide coverage in bad weather—from high winds to heavy smoke.

We’ll also look to use Flying COWs to enhance coverage at big events like music festivals. Used in conjunction with traditional COWs, the Flying COW may allow us to extend coverage to the outlying areas of the festival grounds.

The sky is truly the limit when it comes to the use of drones on our network. The Flying COW is an exciting next step in how we’re using drones to bring strong wireless connectivity to those who need it most.