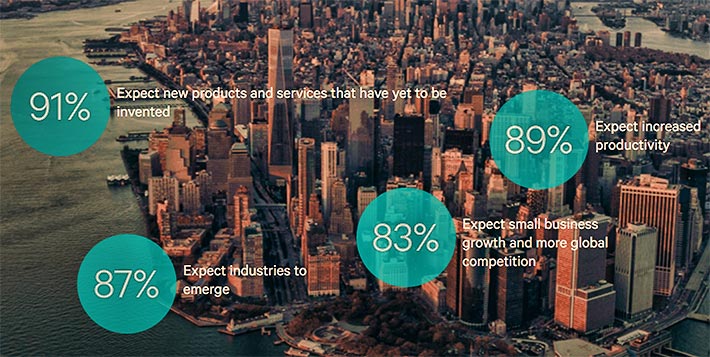 The 5G Economy includes an economic impact study conducted by IHS Markit and validated by Dr. David Teece, as well as opinion research about the expectations for 5G among business and technology leaders carried out by PSB. The combined findings of the study show how 5G will profoundly affect the global economy and that business decision makers in technology and other industries overwhelmingly believe in the transformational nature of 5G.

“These respected researchers confirmed our strong belief that 5G will be a fundamental game changer,” said Qualcomm CEO Steve Mollenkopf.  “We have been hard at work helping create some of the key technologies and applications that will make 5G a reality, pushing the boundaries of LTE, collaborating with industry leaders, and spearheading the critical research behind the next-generation global wireless standard.”

Notably, the study indicates that 5G will catapult mobile into the exclusive realm of General Purpose Technologies, like electricity and the automobile, that provide the foundation for massive innovation, give rise to new industries and benefit entire economies. This will happen as 5G advances mobile from a set of technologies connecting people to people and information to a unified fabric connecting people to everything.

“I’ve spent many years studying the impact of general purposes technologies, and it’s clear that 5G will propel mobile into that category, assuring the technology’s long-term impact on society and continued growth for decades.” said Dr. David Teece.

According to the study, in 2035, when 5G’s full economic benefit should be realized across the globe, a broad range of industries – from retail to education, transportation to entertainment, and everything in between – could produce up to $12.3 trillion worth of goods and services enabled by 5G.

The 5G value chain itself is seen as generating up to $3.5 trillion in revenue in 2035, supporting as many as 22 million jobs. Over time, 5G will boost real global GDP growth by $3 trillion dollars cumulatively from 2020 to 2035, roughly the equivalent of adding an economy the size of India to the world in today’s dollars.

Complementing the economic study, polling research done by PSB confirms that business decision makers and opinion leaders around the globe expect 5G to bring widespread benefits for society and the economy overall, enabling new products and services, increasing productivity and allowing for new industries to emerge. Over 90 percent of the more than 3,500 respondents agreed that 5G will enable new products, services and use cases that have not been invented yet.

For an in-depth look at the study, visit: https://www.qualcomm.com/invention/5g/economy.