After meeting with representatives of the FCC’s Wireless Telecommunications Bureau last week, city and town leaders from Massachusetts, Georgia and Minnesota, as well as a representative of the National League of Cities, presented them with what they believe could be a model template for telecom installations in public rights of way. 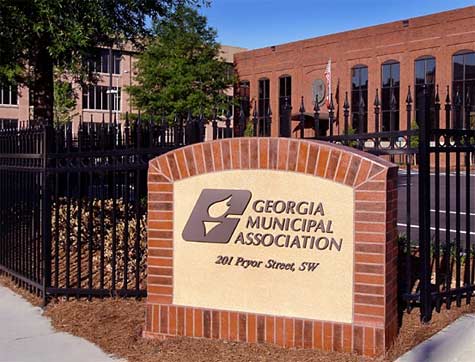 During the meeting, they urged the Commission to avoid a one-size-fits-all mandate for local governments on small-cell wireless siting, and discussed the widely varying challenges faced by cities throughout the nation in working to improve wireless coverage for city residents, while preserving their residents’ rights of way, safety, and city planning priorities.

They also provided examples of the work being done proactively by Georgia cities and the Georgia Municipal Association, along with Mobilitie, to develop a sample agreement that incentivizes collocation of wireless sites on existing infrastructure and preserves the local aesthetic character of Georgia’s many historic neighborhoods.

Over the past year, cities throughout Georgia have been approached by wireless infrastructure companies such as Mobilitie requesting permits to install poles in municipal rights of way and/or place equipment on existing poles. While municipalities recognize the need to accommodate wireless infrastructure, they also recognize the importance of addressing the health, safety and welfare of the public given the numerous facilities and infrastructure that will need to be placed in the ROW.

The Agreement was developed as a cooperative effort between GMA and senior representatives of Mobilitie in an effort to help facilitate the deployment of wireless infrastructure in Georgia municipalities while recognizing the municipal right to manage access to the ROW.

The end result is a template or model agreement that can be tailored to the unique circumstances of each city. The agreement imposes reasonable safeguards on the placement and maintenance of wireless equipment and facilities in the ROW while also addressing reasonable compensation to be paid by Mobilitie for its use of the ROW.

Equally important, the License Agreement will provide a level of consistency between license agreements with cities, as well as streamline and expedite Mobilitie’s access to the ROW.

HIGHLIGHTS INCLUDE:
· Requires colocation of communications equipment on existing poles unless Mobilitie provides proof colocation is not possible;
· City has discretion over appearance of new poles, and new poles must meet the city’s approval regarding aesthetics, visibility, environmental, and safety standards;
· Mobilitie agrees to pay an annual license fee to the city of $500/ site/ year for pole attachments to existing poles. For new poles, Mobilitie will pay $1350/ site/ year with a 3% annual escalator; plus $500/ year for any other carrier that locates on the new Mobilitie pole;
· Mobilitie will honor executed agreements with cities that are in place if federal or state laws change to preempt local control over permitting or compensation.
· Permitting process consistent with Georgia Department of Transportation’s Utilities Accommodation Policy and Standards Manual (UAM) in addition to requiring Mobilitie to follow local codes and ordinances to obtain a permit.