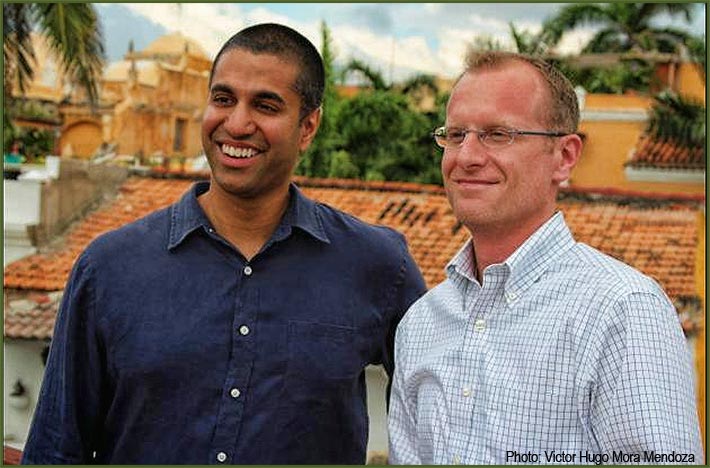 When he was a Commissioner, FCC Chairman Ajit Pai, left, and his legal counsel, Brendan Carr, discussed with Colombian officials how technology can combat poverty.

As anticipated, the White House has announced that President Donald Trump has nominated Brendan Carr to fill the open Republican seat on the Federal Communications Commission.

Carr, a former telecom lawyer, joined the Commission in 2012 as then Commissioner Ajit Pai’s wireless public safety and international legal advisor and was then appointed in January to general counsel by Chairman Pai.

“Brendan has a distinguished record of public service,” Pai said in a statement. “In particular, Brendan’s expertise on wireless policy and public safety will be a tremendous asset to the Commission. I look forward to working with him in his new role and wish him all the best during the confirmation process.”

Mignon Clyburn, the FCC’s lone Democrat, said that Carr “is well respected on both sides of the aisle and has demonstrated a deep knowledge of the legal and policy issues facing the communications sector.”

Carr has already been on the front lines defending Pai’s policy swings and he is expected to back the Chairman’s efforts to undo the FCC’s 2015 net neutrality rules.

Also, as anticipated, there was an organizational ground swell of support from trade groups.

In a statement, NAB president Gordon Smith said the organization “strongly endorses” Carr’s nomination. “He has a firm grasp on telecom and media law and the right temperament to be a superb Commissioner,” Smith said. “We support his swift confirmation.”

“I congratulate Brendan Carr on his nomination to serve as a Commissioner on the Federal Communications Commission. Over the course of his career, he has established himself as a thought leader who consistently promotes policies designed to improve America’s broadband networks,” Adelstein said.

“His work on the issues facing the wireless industry and his dedication to serving the public are commendable. He has a proven record of advocating sound policies that enable the widespread deployment of mobile broadband in communities of all sizes. We look forward to working with him on the important issues facing our members and the entire wireless industry,” added Adelstein.

“Mr. Carr’s extensive background navigating complex wireless and public safety issues during his previous roles at the agency will serve him well as he prepares to assume the final open seat available on the Commission.”

“NATE looks forward to working with Brendan Carr and his staff on the many policy and regulatory issues facing our dynamic industry. The Association urges the U.S. Senate to swiftly confirm the nominations of both Jessica Rosenworcel and Brendan Carr so the FCC has a full complement of five commissioners ready to tackle the industry’s challenges that lie ahead,” added Schlekeway in a statement.