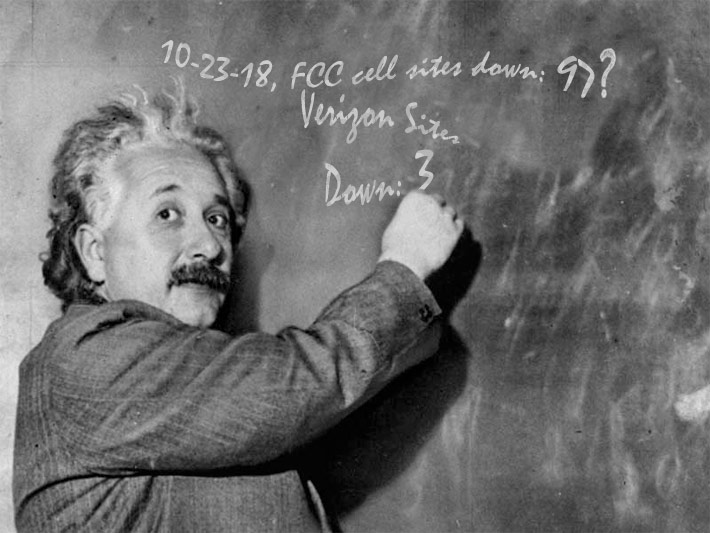 Acknowledged as having the most sites out of service following Hurricane Michael, Verizon provides a glowing report that doesn’t correlate with FCC data. The FCC said in Bay County, Fla. yesterday, there were 97 cell sites out. Verizon said on Monday that they only had three sites down in all of the affected areas.

FCC Chairman Ajit Pai last week chided carriers for their slow progress in restoring wireless service in areas close to where Hurricane Michael made landfall. He called it “completely unacceptable.”

Yesterday, he complimented broadcasters for their stellar job.

“Another familiar aspect is local radio and TV broadcasters were unsung heroes in their first informer roles and in the aftermath,” Pai told reporters.

Although he’s tempered his comments after publicly slamming the carriers for dragging their heels in rebuilding the storm-damaged telecom infrastructure, he’s not reneging on his promise to have the Public Safety & Homeland Security Bureau initiate an investigation into the carriers’ intolerable response

One of the areas the agency will most likely investigate is the accuracy of the barrage of public relations releases that wax eloquently on how well the carriers are performing in bringing back service to the affected counties.

Verizon, acknowledged to have performed the worst due to fiber cuts and backhaul issues, on Monday provided a glowing report of their restoration progress, stating in a press release: “Services for our customers and first responders are back up and running today, providing wireless coverage essentially everywhere it was before Hurricane Michael hit.”

They went into the wireless recovery weeds with ars Technica the same day, stating, that only three cell sites are still out of service, and of those three, there was enough overlapping coverage from other sites to drop their non-performing cell sites to two.

On the following day, the FCC reported that there were still (see below data) 118 cell sites out in the affected areas of Florida, with 97 of them being located in Bay County where Verizon is the dominant carrier, implying that three other carriers are responsible for 115 site outages and Verizon deserves sainthood – if you were to take their three-tower outage count as gospel.

AT&T appears to be the next largest carrier in the Florida Panhandle and will most likely see additional business because of their more hardened network.

Their most recent press statement regarding network status was issued on Oct. 19, 2018, where they stated: “Today, our network in affected areas in Florida and Georgia is operating at more than 99.9% of normal.”

The almost perfect coverage percentage doesn’t identify the number of sites that they have out of service, however; using Georgia to compile their affected area network coverage will skew Florida’s counts since Georgia has so few problems that the FCC deactivated coverage a day before AT&T’s press release.