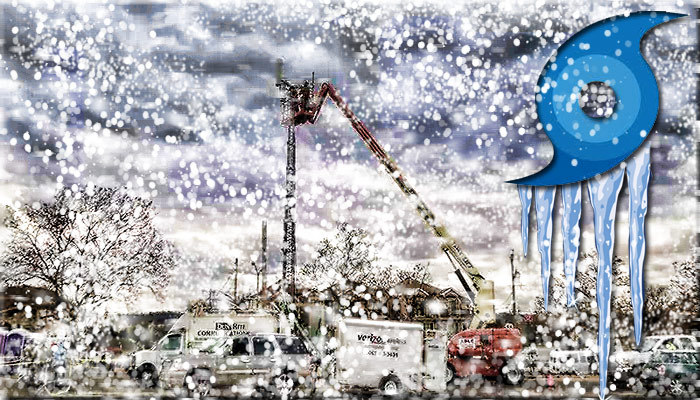 Carriers are beginning their snow job smoke and mirrors campaigns to promote how hardened their networks were during Hurricane Florence’s onshore onslaught and the resulting flooding in the Carolinas.

Carriers are trying to outdo each other in presenting how well their network faired following Hurricane Florence’s slow destructive dance across the Carolinas. Now a tropical depression, Florence is still a life-threatening storm as widespread flooding continues to destroy homes and cut off communities from resources and cell service.

Yesterday, in a press release, Verizon said their “network continues to withstand the severity of the storm’s impact with nearly 99% of our facilities in the Carolinas in service.” The statement, uploaded on Sept 16., appears to imply that in North Carolina, where almost 14% of all cell sites were down in the affected counties, according to the FCC’s Disaster Information Reporting System data for Sept. 16, that Verizon was only responsible for 1% of the 787 outages.

Did references to the Carolinas refer to counties not affected by the storm?
A Verizon media spokesperson informed Wireless Estimator, “We don’t release our specific number of cell sites, but,” referencing a conflicting Verizon press release with a lower percentage, she said, “you can see our percentage in service on the 16th was 97%,” signifying that only 3% of Verizon’s cell sites were down in the affected counties, increasing the 14% average of outages for the nation’s three other largest competitors.

Following Florence’s landfall, T-Mobile hasn’t offered any information regarding cell site outages or efforts that are underway to ensure that they maintain a hardened network. Their latest update was published this morning regarding continuing their free calling/texting/data for subscribers.

Couching their downed sites in what they believed were acceptable terms, Sprint said damage to their network is “minimal, and the relatively small number of down sites are primarily a result of commercial power outages.”

In short, Sprint is implying that it is Duke Energy’s fault because some of their sites are down and not because they don’t have backup generators and sufficient fuel resupply capabilities.

On Sept. 15, AT&T said, “Overall, our network continues to perform well in affected areas. Storm damage and power loss may be affecting service for some customers in parts of North and South Carolina.”

Hurricane Sandy saw the same song and dance routines
After Hurricane Sandy came ashore in New York and New Jersey in 2012, the FCC identified that an average of 25% of carriers’ cell sites were down following the hurricane’s first path of destruction.

At that time, Verizon spokesperson Tom Pica said that 94% of Verizon’s cell sites were up and running.

“If nine out of 10 of our towers are running, and the industry as a whole has three of four, someone else is obviously dragging down the average,” Pica said. “It’s unlikely anyone else is better if we’re at 94%.”

T-Mobile selectively reported a high 90% of cell sites running in Washington, DC, where Sandy swept by without causing considerable damage, and 80% in New York, but they didn’t release figures from hard-hit New Jersey.

Six days later, Pica said that 99% of Verizon’s cell sites were working at a time when the FCC announced that 19% of the affected areas’ sites were out of service.

Adding to what appeared to be embroidered network performance statistics from all carriers, according to Wireless Estimator’s reporting, AT&T said more than 98% of its cell sites were working across the storm region, with about 95% in New York City. T-Mobile said that in the Northeast 95% of its locations were up and running and Sprint said they were 92% operational in New York and New Jersey.