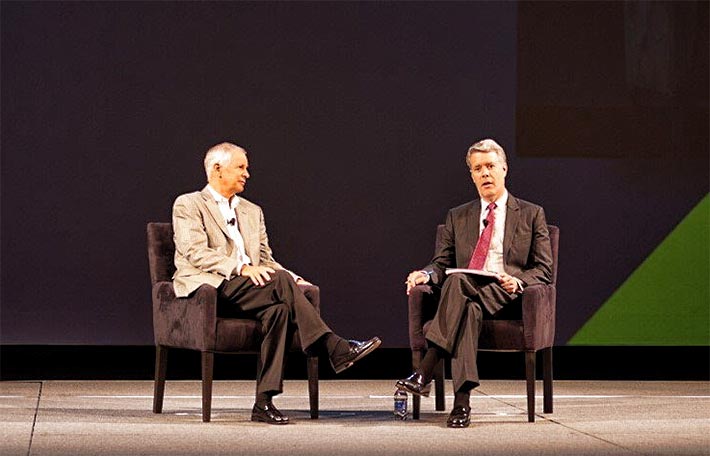 Dish Network Chairman Charlie Ergen said that his company will be building a full-blown 5G wireless network that will cost $10 billion in an interview Wednesday at the Wireless Infrastructure Association’s  Connect (X) conference in Charlotte, N.C. by former FCC Commissioner Rob McDowell.

Ergen pointed out that current wireless networks are designed for approximately 300 million smart phone users in the U.S., but the company’s Narrow Band Internet of Things (NB-IoT) network will be designed for the future which will be “300 billion things,” he said.

He stated that one of the advantages that Dish has over the market’s big four carriers is the ability to enter the 5G market without legacy 2G, 3G, and 4G operations, allowing the company to design specifically for IoT services.

Dish had previously said that since 2008, they have directly invested over $11 billion to acquire certain wireless spectrum licenses and related assets and made over $10 billion in non-controlling investments in certain entities, for a total of over $21 billion.

In March 2017, they notified the SEC that they plan to deploy a next-generation 5G-capable network, focused on supporting NB IoT.

In February, Dish said during an earnings call that the carrier is “making good steady progress on the network buildout,” and they have already engaged with network equipment vendors, tower providers and chipset and deployment companies to build out its NB-IoT network.

The phase one investment is approximately $1 billion, Ergen said.

Ergen informed attendees that he was thrilled to embark on this new venture into the wireless industry, stating that “for me, it’s not a job. … It’s not going to change my standard of living. It’s like a hobby—you get up every morning excited about it.”

He identified that Dish’s spectrum aggregation was not a hold-and-sell play. He said Dish has already “signed some master lease agreements with tower companies” for building out the network.

Analyst Craig Moffett said in a note to clients, “Perhaps the biggest and most important takeaway is that Ergen sounds genuinely committed to a build-not-sell plan for his spectrum. The notion that Dish actually plans to build a network is underscored by Ergen’s disclosure – we believe for the first time – that Dish has begun to enter into real, and long-term, tower lease commitments (these initial contracts have been separately confirmed to us by our sources in the tower industry).”