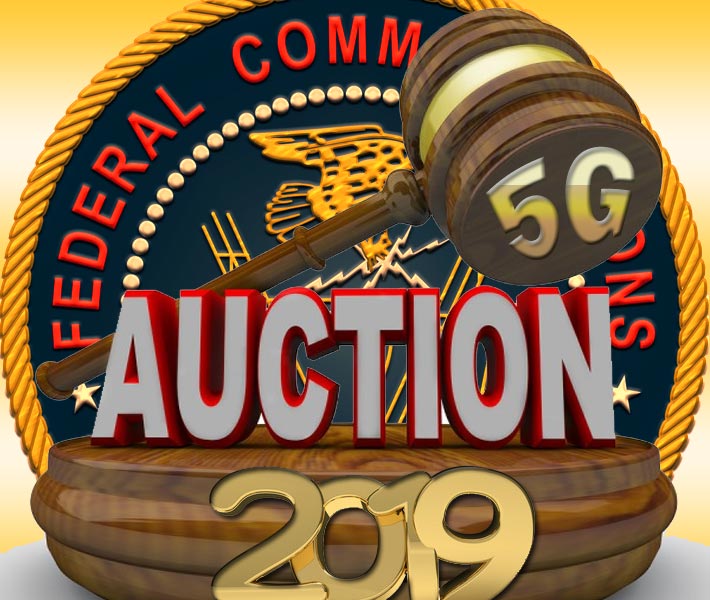 The 2019 auction will be the second 5G spectrum auction

The FCC today took a significant step at its open meeting toward holding a major 5G spectrum auction in 2019 by adopting new rules that will promote the availability of high-band millimeter wave spectrum for the next generation of wireless connectivity. The airwaves in the combined Upper 37 GHz and 39 GHz bands are the largest amount of contiguous spectrum available for wireless service in the millimeter wave bands—2,400 megahertz in total—while the 47 GHz band provides an additional 1,000 megahertz of spectrum. The Fourth Report and Order in the Spectrum Frontiers proceeding is another key step toward ensuring American leadership in 5G.

Specifically, the Fourth Report and Order:

New entrants and participating incumbents may bid for new licenses.  Incumbents that bid for new licenses may use “vouchers” equivalent to their existing holdings for credit toward the amount they bid in the auction.  For an incumbent that chooses not to relinquish all its existing rights, the Report and Order provides methods to modify the incumbent’s licenses so that they align with the band plan and service areas adopted by the Commission.

In a Statement, FCC Chairman Ajit Pai said that making more spectrum available into the commercial marketplace was a key component of its plan to maintain American leadership in the next generation of wireless connectivity. “Currently, we’re conducting an auction of 28 GHz band spectrum, to be followed by a 24 GHz band auction. And today, we are taking a critical step towards holding an auction of the Upper 37, 39, and 47 GHz bands in 2019. These and other steps will help us stay ahead of the spectrum curve and allow wireless innovation to thrive on our shores,” he stated. View the FCC’s 5G FAST Plan.

The Wireless Infrastructure Association’s President and CEO Jonathan Adelstein also praised the agency’s approval of the report and order.

“This action will help the U.S. continue to lead the world in wireless innovation. Two thousand and eighteen has been a banner year for the Commission in laying the foundation for next generation wireless services, and today’s open meeting is a continuation of this commitment to win the race to 5G,” said Adelstein.