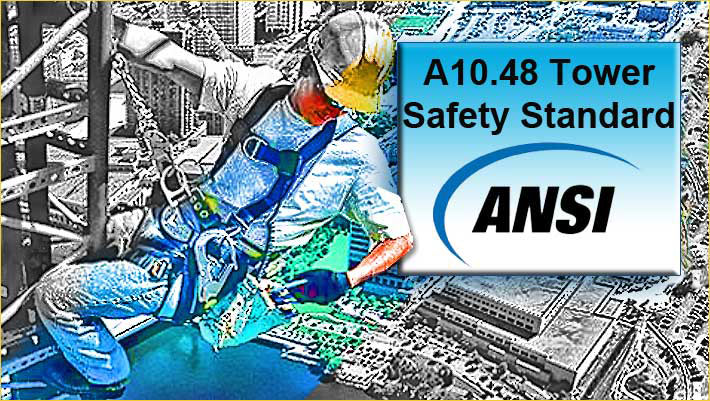 The SBRA panel appears to have sided with industry advocates who believe that OSHA should adopt the ANSI A10.48 standard

An extensive 266-page report from The Small Business Advocacy Review Panel (SBAR) regarding a possible new OSHA standard that would apply to all work activities performed on cell, broadcast and all other communications towers was released this week with 10 key recommendations (below) for OSHA to consider if they’re going to introduce a new industry safety rule.

OSHA is required to receive input  from the SBAR before a proposed rule is published.

The SBAR panel, comprised of representatives from four federal agencies, selected 26 small entity representatives (SERs) from construction and maintenance companies to offer their advice and recommendations.

One of the significant concerns and requests of the majority of SERs was that a new OSHA rule might be in conflict with ANSI A10.48 and OSHA would be better served if they adopt that standard.

The panel agreed, recommending that OSHA should “consider adoption by incorporation of the ANSI A10.48 safety standard to make it a part of federal regulations.” The panel also recommended that if OSHA does not adopt the standard that it should consider aligning any subsequent proposed rule as closely as practicable with it.

In 2015, OSHA issued a request for stakeholders to answer 38 questions to assist the agency in identifying if a new industry rule should be developed based upon the information received. Wireless Estimator supported the request and contributed 1,326 comments for their assessment.

Further action by OSHA was curtailed, reportedly due to the 2016 election and President Trump’s dictate that for every new regulation that was introduced, agencies were required to  eliminate two old regulations.

In 2016, the A10.48 Standard – Criteria for Safety Practices with the Construction, Demolition, Modification and Maintenance of Communications Structures — became effective and has held the distinction of being the first comprehensive standard encompassing the entire tower construction, service and maintenance industry.

Earlier this summer, an SBAR panel issued a document regarding questions they would be asking SERs.

On Aug. 3, the SBAR provided an initial regulatory flexibility analysis

Following conference calls with SERs and review of documentation they provided, the panel issued its report this week.

According to National Association of Tower Erectors (NATE) Executive Director Todd Schlekeway, the organization’s leadership is currently reviewing the newly released report, but upon his first read, he said he was encouraged that the panel report provided a compelling case for OSHA to adopt the A 10.48 consensus standard in lieu of pursuing additional regulations.

“NATE played an active role in the SER process and there was a strong contingent of NATE-member SER company owners who represented that position,” Schlekeway said.

OSHA’s next steps are unknown. Kimberly Darby of OSHA’s Office of Communications on Friday said that “OSHA does not speculate on future rulemaking.”

LINKS TO FINDINGS AND RECOMMENDATIONS

Finding:
Many of the Small Entity Representatives (SERs) provided their crew sizes, number of employees, and number of projects per year to the Panel. Several of the SERs’ self-reported crew sizes were below the average OSHA had included in the PIRFA and some SERs reported doing considerably more projects per year than OSHA calculated. At least one SER suggested that there are fewer employees working on towers than OSHA stated, while another SER suggested that there were more companies working on towers than OSHA had found.

Other SERs thought it was important to note that they specialized in particular types of telecommunications towers. For example, some SERs who primarily work on towers that exceed 1,000 feet in height expressed concern that several of the requirements in OSHA’s framework as well as existing consensus standards addressed hazards associated with work performed on smaller towers. According these SERs, work performed on these very tall towers is highly specialized, and several of the requirements imposed on small tower work are infeasible for those working on very tall towers.

Recommendations:
The Panel recommends that OSHA revise the underlying economic model to adjust assumptions concerning crew sizes, projects per year, number of firms, and number of employees, and to revise costs accordingly.

The Panel recommends that OSHA adjust the regulatory framework of the potential standard to take into account the diverse kinds of tower work, particularly work on tall broadcast towers and work that involves many short-lived projects on towers that are visited repeatedly in the course of a year. Factors that OSHA should consider include, but are not limited to, tower size and the frequency and type of work on the tower.

The Panel recommends that OSHA reconsider the data and assumptions concerning telecommunications tower work to determine if there should be additional, specific considerations for work on very tall towers. Factors that OSHA should consider include, but are not limited to, differences in rigging and hoisting, increased load weights, and safety factors.

Finding:
Many SERS were skeptical of the need for regulation based on their perception of the industry’s widespread compliance with the ANSI A10.48 consensus standard. Some SERs, however, expressed concern about a minority of operations that did not follow consensus standards. Some SERs pointed out that while consensus standards are regularly and easily updated in response to new technologies or best practices, OSHA standards are seldom updated. Several SERs also expressed a need for regulation of tower owners who fail to provide crews safe access, including by failing to maintain safe-climb systems and to provide a straight, unobstructed path to climb to the top of the tower.

Recommendations:
The Panel recommends that OSHA examine the industry’s current compliance with ANSI A10.48 and the extent to which an OSHA standard would improve industry safety practices.

The Panel recommends that if OSHA goes forward with a rule, OSHA provide as much flexibility as feasible to ensure that the rule would not create conflicts when consensus standards are updated. OSHA might consider doing this by avoiding detailed specifications and setting performance-oriented requirements. For example, OSHA might require unmanned aerial systems (drones). inspections, such as for safety climb systems, ladders and tie-off points, but not specify the method of inspection so as not to preclude inspections using unmanned aerial systems (drones).

3.  Adopting by Incorporation the ANSI A10.48 Standard

Finding:
A number of SERs work on telecommunications equipment that is not located on telecommunications towers. These include SERs whose primary line of business is in electrical power transmission and outdoor billboards. Those SERs said that they already follow OSHA rules pertaining to work on their structures, including 1926 Subpart V Electric Power Transmission and Distribution, 1910 Subpart D Walking-Working Surfaces, and 1926 Subpart M Fall Protection. The SERs were concerned that their workers would be confused about which rules apply to them.

Recommendation:
The Panel is concerned about any expansion of the scope beyond telecommunications towers to include non-dedicated telecommunications structures. Any such expansion has the potential to cause confusion and possible regulatory overlap, and OSHA might need to consider a wide variety of issues that the OSHA regulatory framework provided to the SERs did not address. In considering the need for such an expansion of scope, OSHA would need to carefully explain why existing regulations insufficiently address significant risk, and provide a full analysis of the ways in which such an expansion would reduce significant risk and be economically and technologically feasible.

Finding:
SERs told OSHA that they do more training than what OSHA requires in the potential regulatory framework, and that they would like as much flexibility as possible with their training and development programs, which they incorporate into on-the-job and apprenticeship training. In addition, one SER told the Panel about a climbing and training safety program from the Society of Professional Rope Access Technicians (SPRAT) and recommended that OSHA require training follow this program rather than the requirements of the ANSI A10.48 standard. This SER said that companies working under this program have experienced no climbing fatalities.

Finding:
Some of the SERs noted that several of OSHA’s stated units costs were lower than costs they encountered doing business. These SERs mentioned specifically that the actual unit costs for crane rental and engineering assistance were higher than OSHA’s cost estimates.

Some SERs expressed concern that the many consensus standards they already follow, state tower safety rules they must follow, and other federal safety rules could be conflicting.

Recommendation:
The Panel recommends that OSHA re-examine whether any state and federal laws or rules would conflict with the potential OSHA telecommunications towers rule and whether these conflicts negatively affect worker safety.

Findings:
Some SERs were concerned about any possible specification of what weather conditions would require ceasing work. SERs were also concerned about requirements for regular weather check-ins when common sense could determine whether it was safe to commence or continue work on the tower. Some SERs also expressed concerns about how to deal with wildlife hazards.

Recommendation:
The Panel recommends that OSHA consider the benefits of requirements related to weather-related hazards and, if these requirements are determined to be necessary, keep the requirements as flexible as feasible.

Comments? Send them to info@wirelessestimator.com or post them on social media.