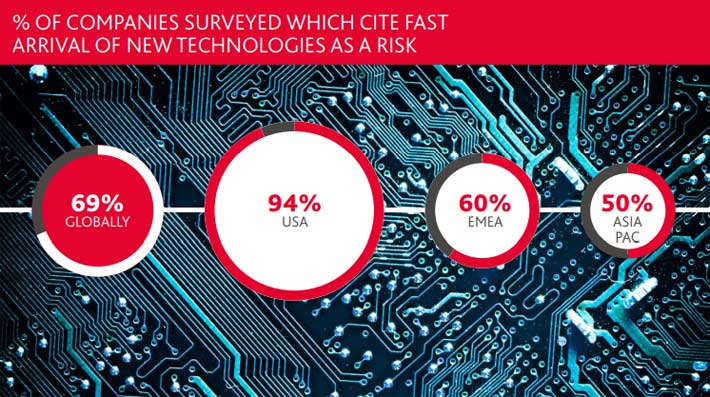 Telecommunications companies surveyed for the 2018 BDO Telecom Risk Factor Survey are feeling a little more assured that there will be a successful future as compared to previous surveys, but BDO Global’s findings indicate that “dramatic changes in the political, business and economic environment means new risks are appearing the horizon,” and the industry must adapt to rapidly changing market demands and the accelerating pace of technological innovation.

Of the top five risks identified, the fast arrival of new disruptive technologies was a primary concern of telecom companies, especially in the U.S. where 94% of companies surveyed said they were apprehensive, whereas Asian companies only saw it as a 50% threat.

According to Christian Goetz, leader of BDO’s Global Telecommunications Team, in order for companies to stay ahead of technological changes, “they are acquiring companies to help them evolve their business model, to offer new services, and to also play in the field of the technology companies.”

The fourth edition of the survey, available here, also pinpoints and examines recurring trends and on-going developments in the telecoms space.

The report said the future is still looking uncertain in many aspects. “Perhaps this is one of the reasons why risks associated with assumptions regarding future profitability has seen a 200% increase. Risks associated with gaining market share is up by 100% while risks from saturation/decline of the telecoms market is up by 80%,” BDO stated in their summary.

In addition to new technologies, the BDO survey identified the following four risks:

Exchange rate/foreign currency changes: 2018 exchange markets continue to suffer from the uncertainty that defined a tumultuous 2017, as well as new developments. Brexit, Trump, North Korea, regulatory agendas, trade pressures and looming trade wars are but a few of the risks that influence exchange rates. For telecoms, which are generally defined by substantial cash flow, international customer bases and engage in large M&A deals, the potential impact of fluctuations can be especially significant.

Increased competition: The telecoms industry is going through a period of continued consolidation with regional and national competition for market dominance. Increased competition is one of the growing risks identified in the 2018 BDO Risk Factor Survey, continuing a trend from both 2016 and 2017. Competition is not contained to the telecoms industry, as new entrants, often from the technology sphere, continue to challenge existing business operations and solutions putting even more pressure on prices and earning potential.

Access to finance: Telecoms is a land of megadeals (deals with a value of more than $1 billion) and large-scale infrastructure projects. The future roll-out of 5G networks being an example of the latter. The desire to expand business operations, improve service delivery and roll out new products all require access to finances. Credit ratings in the industry are not at the levels they used to be, and profit per customer seems to be falling, meaning that access to funding presents a significant risk.

Interest rates: Telecoms is traditionally more vulnerable to changes in interest rates than many other industries. In part due to the long-term nature of investments and large scale of many mergers and acquisitions. Often regarded as blue-chip dividend stocks, both rises and falls in interest rates can lead to financial risks; something that remains true in 2018.