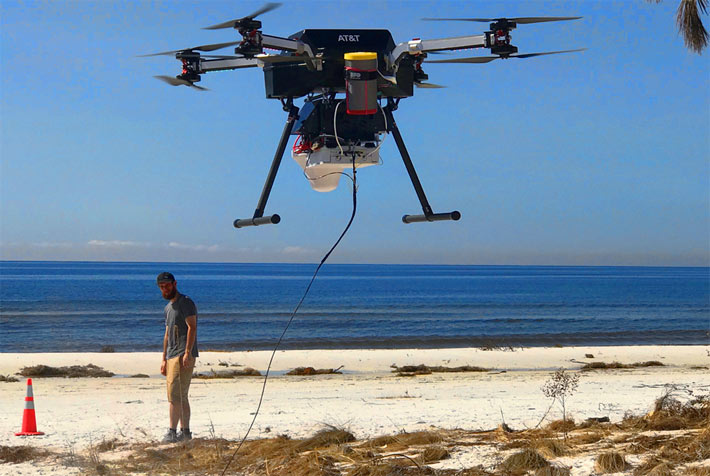 AT&T is assisting first responders and local residents of Mexico Beach, Fla. by providing cell service with its flying COW. According to one individual assisting in relief efforts in the Florida panhandle, there is no comparison between the extensive disaster response efforts by AT&T versus Verizon whose backhaul fiber damage is still disrupting coverage for their subscribers. Photo courtesy: AT&T

Recent news reports indicate that Verizon, a key carrier for Panama City and outlying suburbs in Bay County is still struggling to bring sites on line due to fiber cuts that are creating backhaul issues.

Days after the storm, Florida CFO and State Fire Marshal Jimmy Patronis informed CNN, “Verizon Wireless does not exist in Bay County anymore. It was a dominant carrier. So if you have T-Mobile or AT&T you’re able to get a call out. Governor Scott, earlier today, bought 400 AT&T cellular phones just to pass out to our Sheriff’s Department and first responders simply to allow communications to get somewhat functional between different agencies trying to save lives.”

Verizon frequently points to the serious devastation in Mexico Beach and has said that as soon as they repaired a fiber cut, heavy equipment was clearing debris from Highway 98 and would cut the same cable.

However, Mexico Beach is only a small community in Bay County with a population of approximately 1,200 residents, and did not have a great amount of cell sites to serve the community. The county has 184,000 residents with the county seat, Panama City, having 37,000 residents.