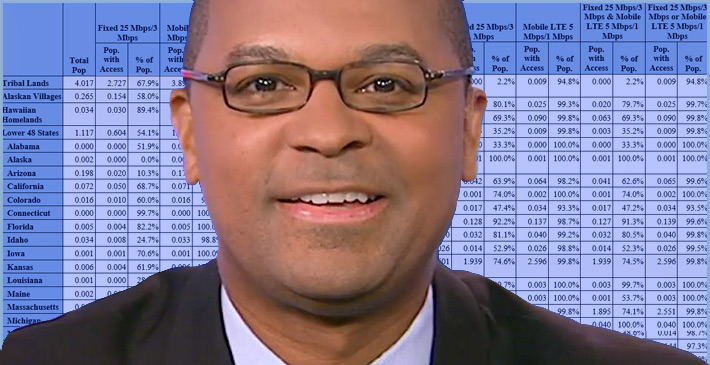 After the FCC revealed its 2019 broadband deployment report yesterday, identifying a healthy accounting that the digital divide has closed by more than 18% from the end of 2016 through 2017, Commissioner Geoffrey Starks called the report “fundamentally at odds with reality,” citing an embarrassing error in the development of the report itself.

Starks said the fundamental disconnect between the report and reality was reason enough for his dissent.

“I am also compelled to speak out about the process that led to this report, which, when initially circulated, was based on massive, erroneous overstatements of high-speed internet deployment in the underlying data.”

Starks said the errors in the circulated report involved a broadband provider Barrier Free that, in its first broadband service report to the FCC, reported that as of December 2017 it provided high-speed broadband service in an area where 62 million people live.

If Barrier Free’s reporting was correct, and Starks says it wasn’t since Barrier Free acknowledged their errors in its revised filing in March 2019, it would have gone from providing no service as of March 2017 to being the 4th largest ISP in the country as of December 2017.

Starks said, in a statement,  Barrier Free’s filing was included in data due at the end of March 2018.  In February 2019, the Chairman circulated a non-public draft broadband deployment report to the other Commissioners for their consideration.  On the same day, the FCC issued a press release describing the draft report and stating that “the number of Americans lacking access to a fixed broadband connection meeting the FCC’s benchmark speed of 25 Mbps / 3Mbps has dropped over 25%, from 26.1 million Americans at the end of 2016 to 19.4 million at the end of 2017.”

“At this point in time, the FCC had been in possession of Barrier Free’s erroneous data for nearly eleven months.  On March 5, 2019, Free Press, a non-profit public interest entity, filed a letter with the Commission identifying Barrier Free’s erroneous reporting and detailing how it impacted the broadband deployment claims made in the FCC’s February Press Release.

“Surprisingly, the conclusion in the report didn’t change.  In fact, very little in the report changed.  It’s incredible to me that an error this large – approximately 62 million in overstated broadband connections – didn’t materially change the report,” Starks said.

In her dissent statement, Commissioner Jessica Rosenworcel said, “It is simply not credible for the Federal Communications Commission to clap its hands and pronounce our broadband job done—and yet that is exactly what it does in this report today.  By determining that under the law broadband deployment is reasonable and timely for all Americans, we not only fall short of our statutory responsibility, we show a cruel disregard for those who the digital age has left behind.”

In discussing the report, Commissioner Brendan Carr said, “Internet speeds in the U.S. have never been faster: they’re up nearly 40%.  The digital divide—the percentage of Americans without access to high-speed Internet access—narrowed by nearly 20%.  Providers built fiber broadband out to more homes last year than ever before.  The U.S. now has the largest commercial deployment of 5G in the world, and we’re predicted to have more than two times the percentage of 5G connections as Asia.  That is more broadband for more Americans.”