A 150-foot monopole erected in September in Tarrytown, N.Y. enjoyed a scenic view of the eastern bank of the Hudson River, but was retired the weekend before Christmas to a flatbed truck in search of a new home. 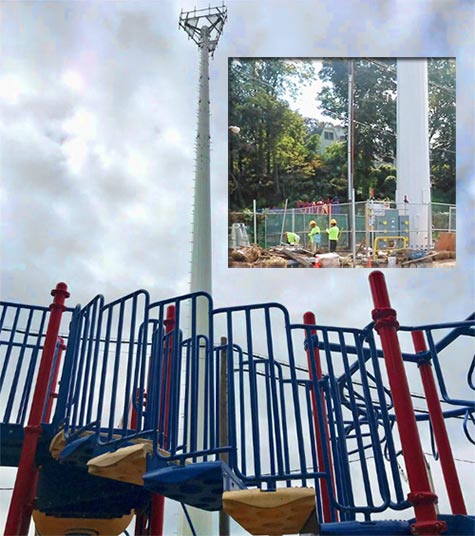 Erected in September, the MTA, after pressure from residents and politicians, dismantled the 150-foot monopole just before Christmas. The structure was located 30 feet from a playground.

The tower was constructed by the Metropolitan Transportation Authority (MTA) because the Metro-North Police needed it to improved emergency communications. However, the MTA saw it as a cash cow and added capacity for multiple co-locators.

Had a carrier or vertical realtor tried to build the tower to accommodate Metro-North, the city would have denied them permission since the structure violated a 100% fall zone set back requirement, but the MTA is exempt from local zoning when construction is upon their property.

The monopole was within 30 feet of a playground serving the low-income Franklin Courts housing project that is 100 feet away. Residents only became aware of it after a weekend erection.

Hundreds of residents and many politicians petitioned the MTA to remove it and the MTA negotiated the structure’s removal and Metro-North’s antennas that were never installed will now be installed at the new State Police barracks on Paulding Ave.

Although the MTA will lose anticipated revenue from the Tarrytown location, they will be building 14 other monopoles in the region with co-location opportunities.

The structure’s dismantling wasn’t scheduled until March, but the early Christmas present to village residents was appreciated.