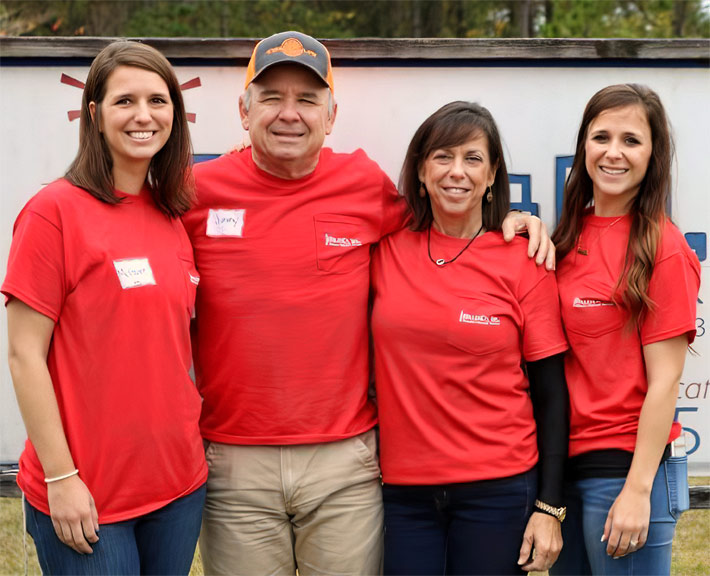 Whereas many company owners will groom their sons to take an active role in management, Jimmy Miller and his wife Tonia, co-founders of the woman-owned business, found that their daughters, Amanda McGuire (left) and Jordyn Ladner didn’t have to be coaxed to embrace the profession.

The National Association of Tower Erectors (NATE) Board of Directors today elected Jimmy Miller of MillerCo, Inc. in Gulfport, Miss. to lead the association as its Chairman. Also elected to leadership roles were Vice-Chairman, John Paul Jones of Tower & Turbine and  Secretary/Treasurer Kevin Dougherty, of Millennia Contracting, Inc.

Miller has been active in NATE as a voting member for 19 years and has served as a director for multiple terms.  He has also served as Board Oversight on the Trade Show Committee, as well as serving on the Financial Investment Committee and Unmanned Aerial System Committee.

MillerCo has also been an ardent supporter of Women of NATE (WON).

Miller held various supervisory and management roles with the Southern Company from 1982 to 1997 involving two-way-radio, fiber optics and microwave communications. He also assisted in bringing a 300-plus cellular network build to market.

However, his entrepreneurial spirit kicked into overdrive in 1997 and he and his wife Tonia co-founded MillerCo with one truck. Today, dozens of the company’s trucks can be seen throughout the country from New Mexico to Indiana and the entire eastern US servicing tower lighting systems as well as providing L&A services.

MillerCo has 60 employees and has an enviable record of servicing approximately 80,000 NOTAMs. The company is expected to reach $10 million in revenue this year.

Miller, 56, like many other successful company owners, used to climb frequently, but today relies upon his safety-conscious field employees.

The company recently built an NWSA-approved 100-foot self-supporting tower at their corporate office for quicker onboarding and  training of new hires as well as recertification of current employees.

All of MillerCo’s operation managers are Comtrain certified and regularly join their crews on the job.

Miller has a BS degree in Computer Science and an MS in Telecommunications. He is a Master Electrician in six states across the Southeast.