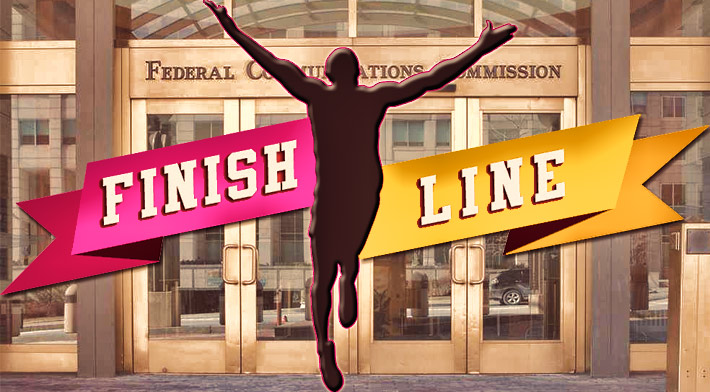 Today, T-Mobile US, Inc. and Sprint Corporation committed to the Federal Communications Commission that they would take a series of significant steps if the companies’ merger application is approved.  That move caused Chairman Ajit Pai to recommend to his colleagues that the FCC approve the proposed $26 billion deal.

Commissioner Brendan Carr agreed, stating: “Approving this combination will help the U.S. notch another win in the global race to 5G.”

However, Commissioner Jessica Rosenworcel has reservations about letting the deal go through, stating in a tweet, “We’ve seen this kind of consolidation in airlines and with drug companies. It hasn’t worked out well for consumers. But now the @FCC wants to bless the same kind of consolidation for wireless carriers. I have serious doubts.”

It’s likely that Commissioner Michael O’Reilly will join Pai and Carr in supporting the merger. Commissioner Geoffrrey Starks has not made a comment.

Chairman Pai responded to the carriers’ new commitments with the following statement:

“Two of the FCC’s top priorities are closing the digital divide in rural America and advancing United States leadership in 5G, the next generation of wireless connectivity.  The commitments made today by T-Mobile and Sprint would substantially advance each of these critical objectives.

“For example, the companies have committed to deploying a 5G network that would cover 97% of our nation’s population within three years of the closing of the merger and 99% of Americans within six years.  This 5G network would also reach deep into rural areas, with 85% of rural Americans covered within three years and 90% covered within six years.  Additionally, T-Mobile and Sprint have guaranteed that 90% of Americans would have access to mobile broadband service at speeds of at least 100 Mbps and 99% would have access to speeds of at least 50 Mbps.

“The construction of this network and the delivery of such high-speed wireless services to the vast majority of Americans would substantially benefit consumers and our country as a whole.

“I’m also pleased that the companies have committed to a robust buildout of their mid-band spectrum holdings.  Demonstrating that 5G will indeed benefit rural Americans, T-Mobile and Sprint have promised that their network would cover at least two-thirds of our nation’s rural population with high-speed, mid-band 5G, which could improve the economy and quality of life in many small towns across the country.

“Moreover, the companies have offered specific commitments regarding the rollout of an in-home broadband product, including to rural households.  This would give many Americans another option for home broadband service.

“The companies have also taken steps to respond to concerns that have been raised about this transaction.  Most importantly, in addition to their prior commitment not to raise prices for three years, T-Mobile and Sprint have decided to divest Boost Mobile.  This sale is designed to address potential competitive issues that have been identified in the prepaid wireless segment.

“In light of the significant commitments made by T-Mobile and Sprint as well as the facts in the record to date, I believe that this transaction is in the public interest and intend to recommend to my colleagues that the FCC approve it.  This is a unique opportunity to speed up the deployment of 5G throughout the United States and bring much faster mobile broadband to rural Americans.  We should seize this opportunity.”