Compliance company Avetta’s representatives were on the hot seat  during a NATE UNITE 2020 educational session in Raleigh, North Carolina last Tuesday as well as during a dinner the following evening. 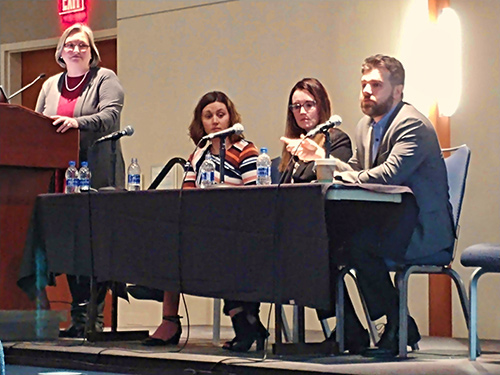 Avetta was proactive during the conference to allay rising contractor concerns over the way they charge and manage onboarding and compliance reviews for the major carriers and towercos.

Last February, Avetta acquired compliance firm BROWZ, which had Crown Castle as a client and there have been concerns and misinformation regarding the invoicing structure for both companies.

According to Shields, Avetta is still on target to complete the Crown integration by this September.

Chiniewicz said that transitioning to a compliance firm “wasn’t an easy decision to make” since Crown had 2,200 vendors in their system, but she emphasized that even though there are still some concerns, she stressed that Crown hasn’t disappeared in the process.

“We’re still here,” she said, acknowledging that it was important to continue to treat their contractors with respect.

Brewer said that since they joined Avetta they have seen a marked improvement in being able to manage their contractors.

She said that it was her company’s policy to frequently revisit the information that was required to be submitted by their vendors, stating that there was no benefit in collecting additional data that they would not use.

Aware of industry concerns, Shields answered Miller’s questions with polished replies and emphasized that they were doing everything possible to gain the industry’s trust and to provide contractors with additional marketplace benefits.

Although the session was entitled Understanding Compliance Companies, the audience knew that it was primarily about understanding Avetta since they have a near monopoly on the industry with key clients like SBA and most recently Vertical Bridge coming on board, and the possibility of American Tower joining as well.

With less than four minutes left in the one-hour presentation, attendees were given the opportunity to question the panelists, but Shields was the target of choice.

One of two speakers said that she had listened for almost an hour and her experience with Avetta and BROWZ has been completely opposite of what was presented. She detailed the problems that she had with red flags and the lack of support by Avetta to address them. She also questioned why contractors had to pay Avetta for services that should be borne by their client.

When she was finished voicing her concerns she sat down to a loud applause by those with similar issues.

The following evening, USA Telecom Insurance Services joined Avetta in hosting an exclusive dinner to network and provide an opportunity for contractors to learn more about the two companies and the Avetta Marketplace.

That’s how it was billed.

However, a greater portion of after dinner conversations had guests complaining to multiple Avetta representative about being red flagged and Avetta’s inability to assist in removing them.

An Avetta spokesperson admitted that they were understaffed and were going to bring on board 100 new employees to assist them, with 30 being dedicated to telecom.

There was a common concern that if those employees had no knowledge about wireless infrastructure that it would not assist the industry.

NATE Chairman Jimmy Miller and NATE members registered their unease regarding the amount of time that contractors have to spend to remain compliant and how an ambiguous red flag can result in a severe financial drain to their business.

Avetta said that they would consider adding wireless contractors to their advisory board.