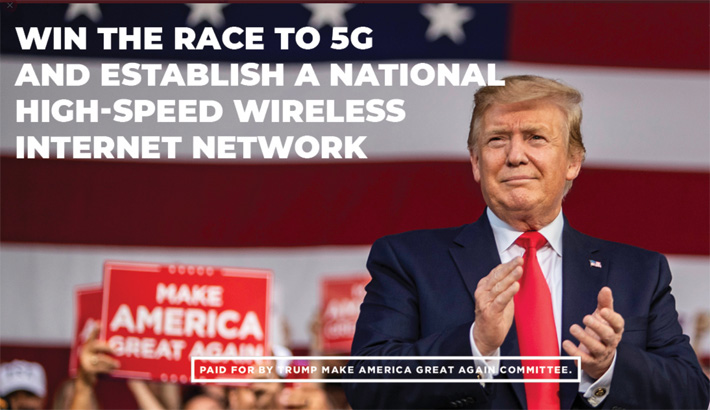 Just before the election for his second term, Republican President Dwight D. Eisenhower proposed the interstate highway system in 1956. In President Donald J. Trump’s campaigning for his second term on Monday he floated his idea for establishing “a national high-speed wireless internet network” in a campaign ad.

President Eisenhower’s vision came to fruition and is an integral part of the American way of life.

President Trump’s digital dream for a public or privately-owned 5G network will most likely hit quite a few roadblocks at the capacity on-ramp, however, since T-Mobile, Verizon and AT&T have already spent billions of dollars building out their 5G networks and if the U.S. wants to win the “race” to 5G, it is possible that the President’s advisors will temper Trump’s national network plan until after the election to ward off carrier concerns

Perhaps he’s already listened to them since the only information the campaign has published in its five bullet point Innovate For The Future items is: Win the Race to 5G and Establish a National High-Speed Wireless Internet Network.

One unsupported speculation is since the White House and the U.S. Military recently announced they would release 100MHz of midband spectrum it could be acquired by Rivada so that it can utilize its software that does dynamic spectrum arbitrage to allocate spectrum in real time.

He said that a number of telecom policymakers in Washington, DC – who asked to remain unnamed – offered polite but firm objections to the idea of a “national” 5G network.

They argued that a national 5G network would only make sense if it were available to small innovators, and even then it would be a tricky proposal to pull off.