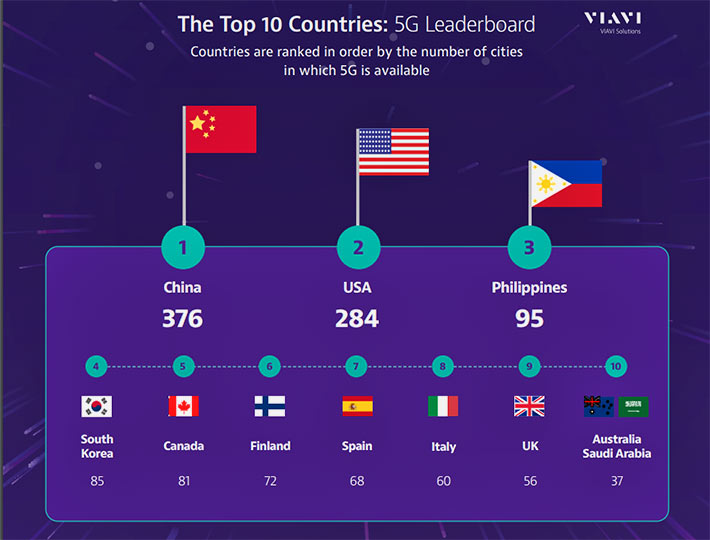 Viavi Solutions Inc. today released new research demonstrating the accelerating pace at which 5G is growing, with coverage extending to an additional four countries and 301 cities worldwide since the beginning of this year. The new total — 1,662 cities across 65 countries — represents an increase of more than 20 percent during 2021 to date, according to the latest edition of the VIAVI report, now in its fifth year. 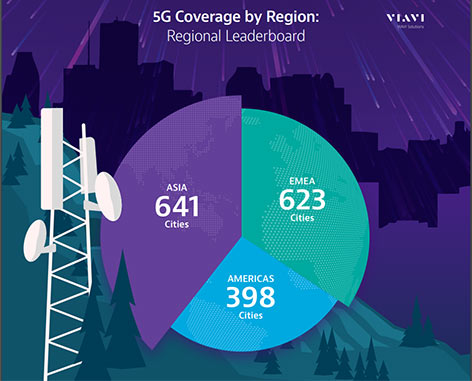 The top three countries that have the most cities with 5G coverage are China at 376, the United States at 284, and the Philippines with 95, overtaking South Korea which is now in fourth position with 85 cities. The APAC region remains in the lead with 641 cities, closely followed by EMEA at 623. The Americas region lags behind at 398 cities.

With the launch of commercial 5G services in four additional countries — Cyprus, Peru, Russia and Uzbekistan — well over a third of the world’s countries now have at least one live 5G network. However, the quality and speed of connectivity can vary significantly from region to region depending on available spectrum.

“Although we are seeing a significant jump in the number of networks being rolled out, not all 5G technologies are created equal,” said Sameh Yamany, Chief Technology Officer, VIAVI. “Networks operating in lower, mid and upper band frequencies perform very differently in terms of reach and throughput, increasing the importance of network assurance and optimization to consistently fulfill the promise of 5G.”

The latest edition of The State of 5G report is available here. The data was compiled from publicly available sources for information purposes only, as part of the VIAVI practice of tracking trends to enable cutting-edge technology development that allows communications service providers to command the 5G network.

This week during the Mobile World Congress in Barcelona, VIAVI is contributing to a demonstration of eMBB end-to-end testing with Rohde & Schwarz (Hall 3, Stand 3K30). VIAVI also will participate in a live panel discussion during the O-RAN ALLIANCE Industry Summit on June 29 to discuss the latest industry updates on the progress of O-RAN, and will showcase new virtual demos related to near-real-time RIC testing and deployment of an O-CU tester on edge infrastructure in the O-RAN Virtual Exhibition.