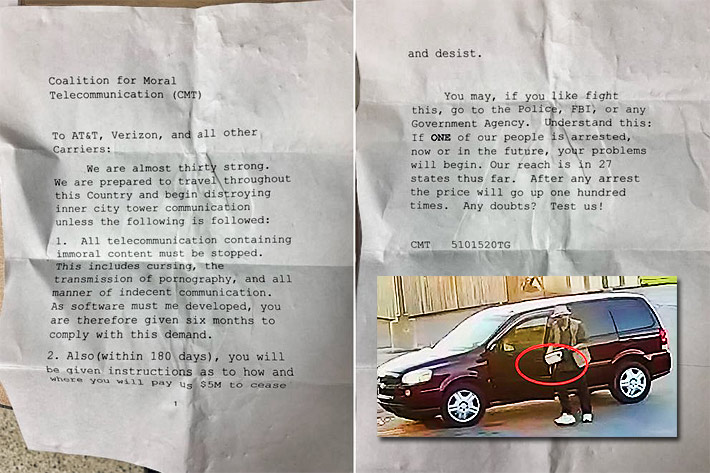 Authorities arrested a retired miner who wanted a ransom of $5 million to prevent him from blowing up cell phone store and tower locations. He was identified by surveillance cameras as he planted the pipe bombs.

Charged was John Douglas Allen, 75, who is also alleged to have put letters placed inside polka dot envelopes and sealed in zip lock bags, at cell towers located in the Upper Peninsula, according to the arrest affidavit.

The incidents began on August 25, when an employee at a telecommunications tower in St. Ignace, found a letter. At least two more letters in similar packaging were found the next day, the affidavit said.

The letters indicated they were from a group called the “Coalition for Moral Telecommunication (CMT),” and were addressed to “AT&T, Verizon, and all other carriers.”

The group’s letter said they were “almost thirty strong,” their reach spanned across 27 states and they were willing to travel throughout the US in order to destroy “inner city tower communication” to stop the spread of immoral content, the affidavit said.

The group demanded a payment of $5 million within 180 days. The letter said if any CMT members were arrested, then “your problems will begin” and the “price will go up one hundred times.”

According to the affidavit, on September 15, 2021, at approximately 7:36 p.m., a United States Postal Service box with black tape on it and a wire coming out of it was placed outside of an AT&T store in Sault Ste. Marie.

Later that evening at approximately 10:10 p.m., another USPS box with black tape on it and a wire coming out of it was placed outside of the Verizon Store, located in Cheboygan.

Based on video footage taken from the cell phone stores and other nearby businesses, as well as an exhaustive investigation by law enforcement, agents were able to determine that Allen was the person who allegedly left the pipe bombs outside of the stores.

“The potential explosion from these devices could cause property damage, personal injury, and/or death. Each of the devices consisted of a metal pipe nipple with two metal end caps, which provided containment for the low explosive powder main charge,” the affidavit read. Metal spheres and nails were found within the powders of each device.

Allen bought the components of the bombs about one year ago at various hardware stores. He used cash to buy these components to avoid detection by law enforcement. For the past year, the bombs were in a box at his property. He waited a year to build up the courage to place them, court documents say.

FBI agents raided Allen’s home Monday and questioned his wife. She was shown images from surveillance footage and said she was “95%” sure the man shown in the images was Allen, according to the FBI.

She also told investigators that during the search they would find polka-dotted envelopes just like the ones that contained threatening letters left in spots across the U.P., according to the government.

Allen allegedly told agents that he acted alone. He is expected to make his initial court appearance on Friday before Magistrate Judge Patricia Morris.