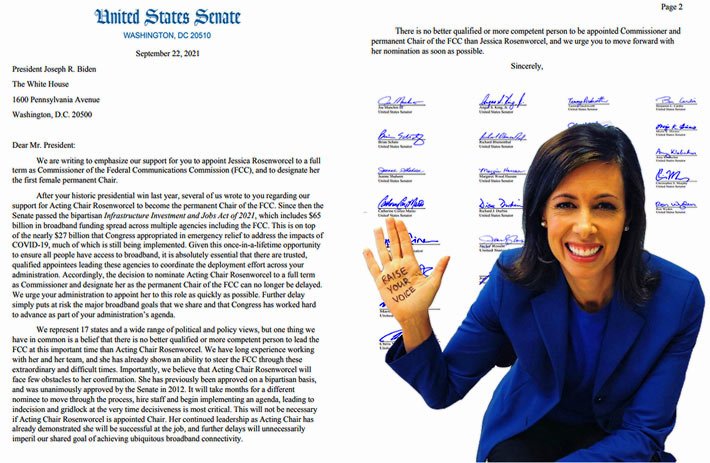 Over two dozen U.S. Senators are urging President Biden to designate acting FCC Chair Jessica Rosenworcel to a permanent position, making her the first woman to hold the office.

Rosenworcel has been serving in an acting capacity since President Biden took office. The 24 Democratic Senators, along with Independent Angus King of Maine, said in their letter that they had voiced their support in a similar letter to Biden prior to his taking office and said having a permanent chair is important, in light of Congressional efforts to provide funding for expanded broadband access nationwide as well as address the impacts of the 18-plus month pandemic, part of the  “Infrastructure Investment and Jobs Act of 2021,” now being considered by the House.

“Given this once-in-a-lifetime opportunity to ensure all people have access to broadband, it is absolutely essential that there are trusted, qualified appointees leading these agencies to coordinate the deployment effort across your administration,” the senators—representing 17 states—wrote in a letter to the president.

They asked President Biden to appoint her to the chair “as quickly as possible,” adding that “further delay simply puts at risk the major broadband goals that we share and that Congress has worked hard to advance as part of your administration’s agenda.”

“There is no better qualified or more competent person to lead the FCC at this important time than Acting Chair Rosenworcel,” the senators said. “We have long experience working with her and her team, and she has already shown an ability to steer the FCC through these extraordinary and difficult times. Importantly, we believe that Acting Chair Rosenworcel will face few obstacles to her confirmation.”

Rosenworcel’s tenure expired on June 2020 but has been extended until January 3, 2022.

Other potential candidates include sitting FCC Commissioner Geoffrey Starks, It has also been rumored that it could be Edward “Smitty” Smit who was a legal advisor to former Chairman Tom Wheeler.