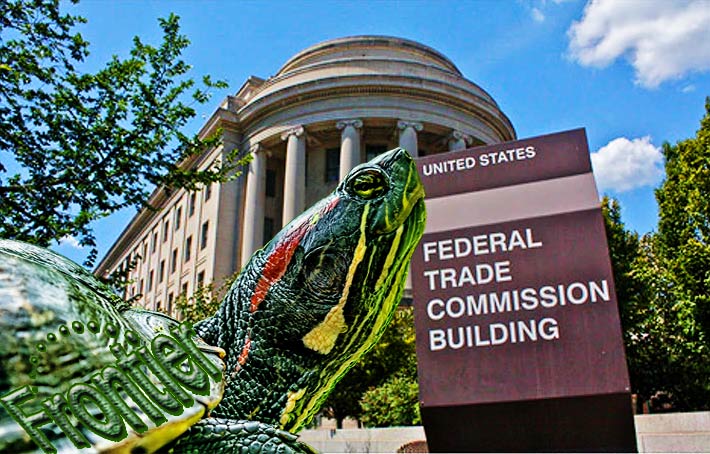 FRONTIER FRAUD? – The FTC and six states said that speeds advertised as fast as a cheetah, were cheating Frontier Communications’ customers since they were at times more in line with a turtle’s pace. A spokesperson for Frontier, which is emerging from bankruptcy protection, said that the lawsuit was “without merit.” The company is at risk of paying megabucks for allegedly lying about the megabytes they were providing customers. In a statement, Frontier said, the lawsuit “includes baseless allegations, overstates any possible monetary harm to Frontier’s customers and disregards important facts.”

The Federal Trade Commission, along with law enforcement agencies from six states, sued internet service provider Frontier Communications this week, alleging that the company did not provide many consumers with internet service at the speeds it promised them, and charged many of them for more expensive and higher-speed service than Frontier actually provided.

In a complaint, the FTC and its state partners allege that Frontier advertised and sold internet service in several plans, or tiers, based on download speed. Frontier has touted these tiers using a variety of methods, including mail and online ads, and has sold them to consumers over the phone and online.

In reality, the FTC alleges, Frontier did not provide many consumers with the maximum speeds they were promised and the speeds they actually received often fell far short of what was touted in the plans they purchased.

Since at least January 2015, thousands of consumers complained to Frontier and government agencies that the company failed to provide DSL Internet service at the speeds they were promised. Many consumers have complained that the slower speeds actually provided by Frontier failed to support the typical online activities they should have been able to perform at the speed tiers Frontier had sold to them.

The FTC’s complaint was filed with the attorneys general from Arizona, Indiana, Michigan, North Carolina, and Wisconsin, as well as the district attorneys’ offices of Los Angeles County and Riverside County on behalf of the State of California.

The complaint alleges that Frontier violated the FTC Act and various state laws by misrepresenting the speeds of internet service it would provide consumers and engaged in unfair billing practices for charging consumers for a more expensive level of Internet service than it actually provided.

Acting FTC Chairwoman Rebecca Slaughter said her agency would do its best to take over monitoring broadband providers from the Federal Communications Commission.

“That active oversight by the proper regulator may have prevented these violations. We have a history of collaboration with the @FCC, and I look forward to working with
@JRosenworcel to ensure that Americans get the protections they need for this essential service,” Slaughter said in a tweet.