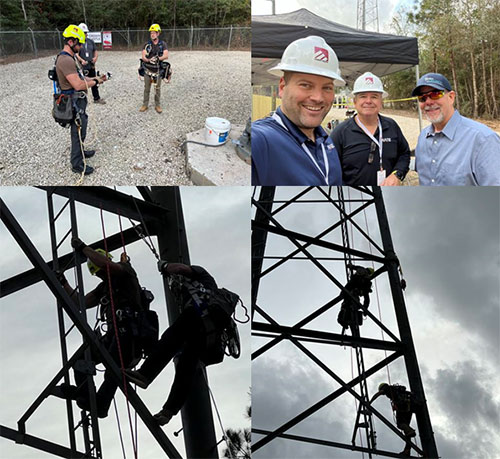 Congressman Crenshaw is a member of the influential House Energy and Commerce Committee, where he has championed important communications and workforce development legislation.

The tour was designed to highlight the prominent role that telecommunications technicians and wireless infrastructure are playing in the country’s efforts to provide broadband coverage to rural, unserved and underserved communities.

The event also provided a valuable platform to discuss the Congressman’s workforce priorities with his constituents and the telecommunications industry. Congressman Crenshaw believes that the U.S. needs “to promote vocational training and apprenticeship programs that give workers the skills that industries actually need.”

During the event, Congressman Crenshaw and Commissioner Carr surveyed the multi-carrier tenet network equipment that is installed on the tower. NATE and Entertech representatives discussed the work that is conducted on a daily basis building, maintaining and deploying communications tower sites and related wireless infrastructure.

Congressman Crenshaw also had the unique experience of wearing a harness and the personal protective equipment technicians utilize to carry out their jobs in a safe and efficient manner.

Given the increased use of unmanned aircraft vehicles for tower inspections, participants also viewed a drone flight demonstration and heard from NATE members about the opportunities these technologies provide for contractors and tower technicians. Participants also shared with the Congressman and Commissioner some of the challenges facing the industry as the Federal Aviation Administration continues to work on regulations impacting commercial drone usage.

“On the House Energy and Commerce Committee, we often talk about delivering broadband to rural communities, but we rarely actually experience what it takes to do it. It was exciting to see the work the men and women in the telecom industry do on communications towers that ensures Texans have access to high-speed Internet and wireless services,” said Congressman Dan Crenshaw. “It is clear that America’s tower climbers and technicians have been working on the front lines of broadband deployment and I am proud to have visited with them and learned more about this critical industry.”

“Thank you to NATE and Enertech for hosting this visit and tower climb. These visits are critical for policy makers to ensure they understand the important role America’s tower techs play in delivering ubiquitous high-speed Internet and communications services,” said FCC Commissioner Brendan Carr. “I have taken part in dozens of tower visits and climbs and every time I learn something new from the professional men and women who build, maintain, and service these critical communications facilities.”

“It was an honor to host Congressman Crenshaw and Commissioner Carr at the Huffman, Texas tower site,” stated Jimmy Miller, NATE Chairman of the Board and President of MillerCo, Inc. “Congressman Crenshaw has championed a number of our industry’s workforce priorities and we are excited that he has experienced first-hand what contractors and technicians face on a daily basis. It is clear that the Congressman has an appreciation for the role that NATE members play in expanding broadband to communities in his district. And, of course, thank you again to Commissioner Carr for his continued leadership and support for America’s tower climber and contracting companies.”

“It was an honor to host our representative in Congress, Mr. Crenshaw, to see what Enertech does on a daily basis,” stated Eric Chase, President and CEO of Enertech Holdings. “As a communications infrastructure contractor, I am proud of the work we do to expand broadband services to our communities, and it is great to see our local Congressman is working to support our industry. I am pleased to know that he has a deeper understanding and appreciation of the work we do and the role we play in expanding broadband to every community in his district.”