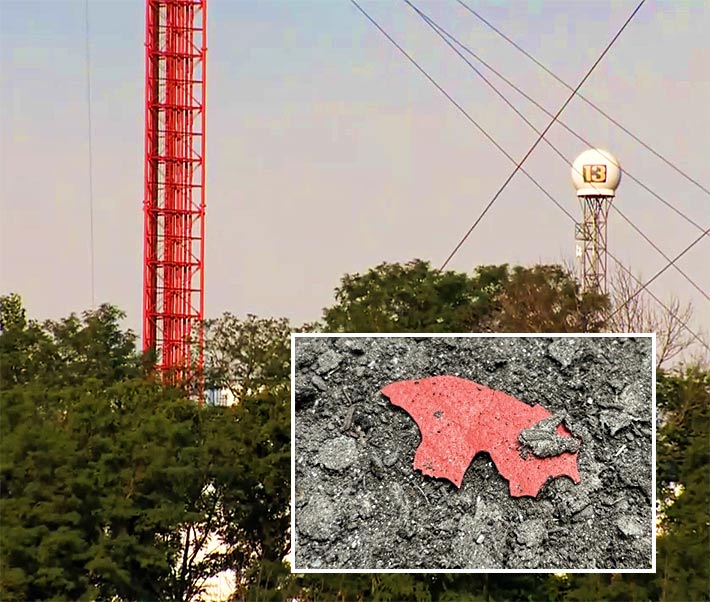 Social media posts had numerous photographs by residents of paint chips on their property and in the street. Lead paint chips were also identified in a day care center.

For almost three weeks, a Nebraska painting contractor was prepping a 997-foot guyed tower in Woodberry, MD, to be repainted by either pressure washing or grinding off existing layers of paint on the structure, according to residents.

In the process, paint chips, some as large as a palm of a hand, have rained down from the candelabra structure on residential and business properties as well as on a public park’s playground. 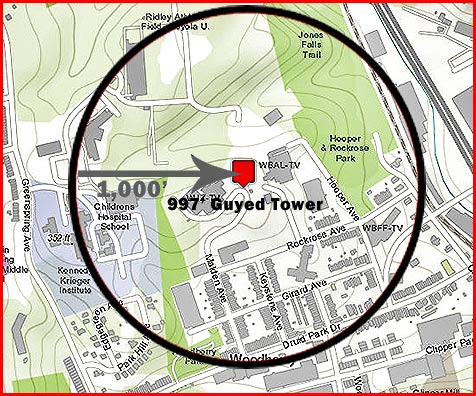 Although a complete mapping has not been made of where the lead-based paint chips have fallen, neighbors have identified locations at least 1,000-feet from the 997-foot tower. Winds during the past two weeks peaked at 15mph, however, they could have been higher since wind speeds are typically measured at 33-feet above ground level.

A homeowner, along with other neighbors in the North Baltimore neighborhood known as Television Hill, who have also spotted the red paint chips on their cars and lawns, started sounding the alarm on social media after one resident obtained an over-the-counter home test kit at a drugstore and the chips tested positive for lead.

The Baltimore Brew broke the story, identifying yesterday that state inspectors from the Maryland Department of the Environment (MDE) confirmed the neighborhood’s worst fear that the paint chips contained lead.

The inspectors “performed testing on the chips using a field device, which detected the presence of lead in the paint,” according to Mark Shaffer, communications director for the MDE.

The contractor was identified as Skyline Tower Painting, Inc.

Yesterday, Skyline was told to sample the paint chips – as well as the paint still present on the tower – to determine whether it constitutes hazardous waste, Shaffer said.

Skyline should have obtained a permit to do the work but does not appear to have done so, according to the Department of Housing and Community Development.

MDE informed the Baltimore Brew that Skyline “has vacuumed paint debris from some of the surrounding areas, including a daycare center, and is working with the homeowners’ association to remove paint chips from the remaining areas affected.”

There is also a concern that the lead paint could have been introduced into the Jones Fall waterway.

As of yesterday evening, local TV stations did not find the neighborhood concern about lead paint newsworthy, possibly because the tower is owned jointly by WJZ‐TV, WBAL‐TV, and WMAR‐TV under the corporate name Television Tower Inc.

The tower was constructed in 1964 at a time when lead-based paint was commonly used.