Update: December 5, 2014 –  Goodman Networks has announced that Ernie Carey will take the helm of the design, engineering, construction and deployment 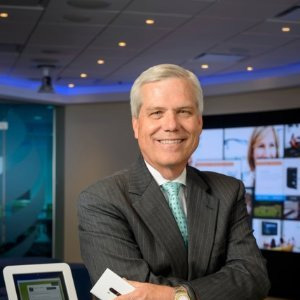 In a press release, Ron Hill, Goodman Networks’ CEO said, “Throughout his long telecommunications industry career, Carey has successfully managed a variety of vast and complex systems and networks, including responsibility for all aspects of one of the nation’s largest wireline and wireless infrastructures.I’m excited to have Ernie join us as our Chief Operating Officer, as he will bring industry knowledge and focus that will enhance Goodman’s growth strategy, portfolio expansion and operational excellence.”

He did not identify where Goodman’s previous COO, Cari Shyiak, will transition to. AT&T has not named Carey’s replacement.

Carey left AT&T at a time when the carrier is sharply cutting back on its infrastructure development. He had reportedly approved the development of AT&T’s cell site of the future plans which were recently scrapped after the engineered loading of the antenna systems proved to be too much for existing towers, overloading the capacity of many structures.

December 4, 2014 – Ernie Carey, Senior Vice President of Construction and Engineering for AT&T, has reportedly been hired by Plano, Tex.-based Goodman Networks, according to individuals familiar with the appointment.

Carey shepherded the carrier’s $14 billion Project Velocity- IP to expand 4G LTE and increased its U-verse business as well as its fiber offerings.

In short, many infrastructure companies’ profitability was based upon decisions made by Carey over the years.

Carey began his career with Southwestern Bell in 1974 and progressed through a series of operations, engineering and marketing jobs.

Since 2008, Carey was responsible for planning, design, construction and capital maintenance of the wireline and wireless network infrastructure across AT&T’s national footprint, including Hawaii, Puerto Rico and the Virgin Island.

Goodman Networks is reportedly preparing a news release to be issued later this afternoon to announce Carey’s new role in the company. The company did not immediately reply to a request for additional information.

Carey’s leadership role will assist Goodman in meeting their ambitious goals following the opening last month of an office in Nuremberg, Germany to launch their expansion into Europe.

In an earlier release, Goodman Networks CEO Ron Hill said, “We plan to leverage our extensive experience with DAS and small cell network design and installation projects to assist carriers and businesses meet growing demand for mobile traffic in Europe. We are excited to begin the globalization of Goodman Networks, building on our strong foundation of success with leading U.S. carriers, businesses, and large public venues.”

In April, Goodman Networks said that it had filed a registration statement with the Securities and Exchange Commission relating to a proposed initial public offering of its common stock. The number of shares to be offered and the price range for the proposed offering have not yet been determined.

A Goodman Networks manager familiar with Carey’s hiring said that he will begin his new role on Monday, Dec. 8, 2014. Test