Polyethylene insulation on coaxial transmission lines caught fire Tuesday in Newport News, Virg. when a crew was welding on a monopole behind Heritage High School.

According to Newport News Fire Department Battalion Chief Steve Pincus, the coaxial cable caught on fire as maintenance workers were welding on the tower just before noon. The flames quickly spread along the insulation of wiring inside and 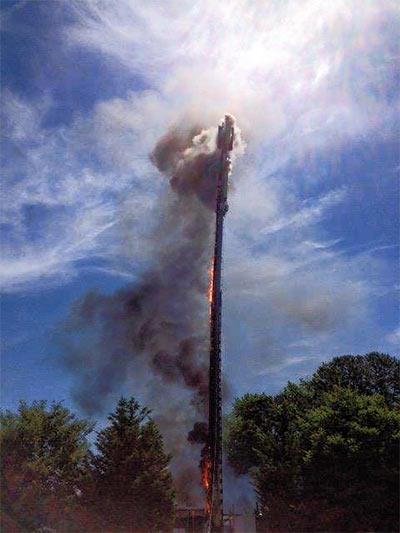 outside of the tower.

The intense fire saw the tower starting to lean precariously and fire crews had to set up a perimeter in case it collapsed. Pincus said additional fire units were called to the scene, due to the extremely hot weather conditions. It took approximately a half hour to extinguish the flames.

Verizon and Sprint workers responded to the scene to assess the damage.

In a statement, Sprint said the carrier was thankful that no one was harmed as a result, and a full investigation is underway to determine the cause. “We apologize for any inconvenience this may cause our customers, and plan to work aggressively to provide temporary coverage for the damaged cell equipment and eventually fully replace these resources in a timely matter,” Sprint said.

The tower’s owner, American Tower Corp., did not respond to a request for information regarding the incident and who the contractor was that accidentally ignited the transmission lines.