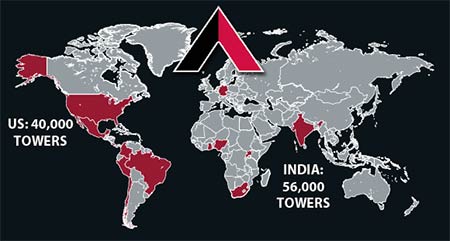 The deal, which was widely expected will see American Tower taking a 51 percent stake in the Indian firm, which currently owns and operates approximately 42,200 towers and 200 indoor distributed antenna systems across India.

American Tower’s existing Indian portfolio of approximately 14,000 towers will be merged with Viom after the deal is concluded, to create a single operator with over 56,000 towers across the country.

Their ownership in India will eclipse their 40,000 towers owned in the U.S.

At closing, Tata Teleservices will retain a part of its holding, with a number of private equity investors retaining certain interests. Under the agreement, American Tower may acquire or be required to acquire all or a portion of the remaining 49% ownership stake in Viom.

“ATC India’s greatly expanded portfolio of towers will enable us to play a key role in providing the communications real estate essential to the deployment of advanced wireless technologies throughout the country and to support the Indian government’s Digital India Initiative.”

Commenting on the transaction, Ishaat Hussain, Director, Tata Teleservices Limited, said “This partnership with ATC presents an opportunity for Tata Teleservices to leverage an enhanced infrastructure portfolio to better address the rapidly expanding market for next generation data services in India.”

Sunil Kanoria, Chairman and Managing Director of Viom and Vice Chairman of SREI Infrastructure Finance Limited, noted that “We have built one of the best assets in the telecom tower space with robust cash flow stream, the highest tenancy ratio in the industry and a well-diversified tenant mix, besides creating a world class management team. We are pleased to have found a new management team for Viom, and believe that ATC is well positioned to continue to optimize these assets given its proven track record of success. From SREI’s perspective, the divestment of Viom will have a multi-fold impact for SREI improving profitability and will be accretive for both shareholders and SREI.”

Amit Sharma, American Tower’s Executive Vice President and President, Asia, said, “Through our joint ownership with the Tata Group of over 56,000 towers, American Tower will be strategically positioned to benefit from the leasing revenue growth opportunities that will come from the accelerating deployment of 3G and 4G technologies by all of the wireless carriers in the market.”

American Tower intends to finance the transaction in a manner consistent with maintaining its investment grade credit rating. The transaction is subject to customary closing conditions and regulatory approval, and is expected to close in mid-2016.