Thanks to early siting entrepreneurs Jeffrey Stoops and Marc Ganzi, Boca Raton, Fla. is fast becoming the hub for tower owners’ corporate offices as witnessed by numerous key players’ offices in a two mile stretch along and off of Congress Ave. 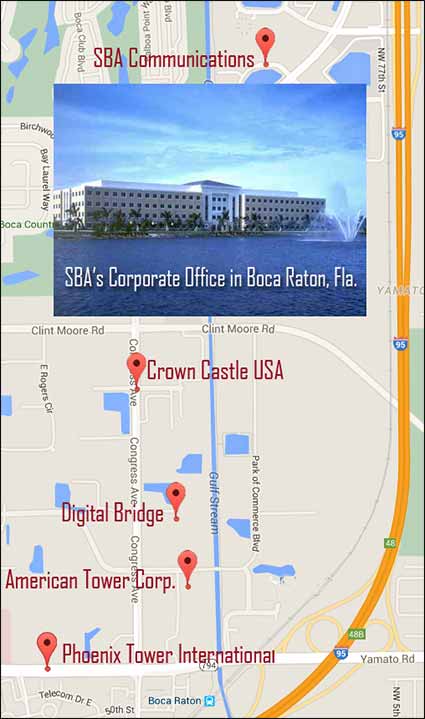 Tower row in Boca Raton, Fla. is a sales representative’s dream if he can set up multiple appoints of companies along the two-mile stretch.

In 2013, however, SBA was bursting at the seams with multiple locations and purchased a 160,000 square-foot building just up the road that was originally designed for IBM. With a $22.65 million price tag, the four story building required extensive renovations, but is reportedly larger and  more technologically advanced than SBA’s two larger competitors, American Tower in Boston and Crown Castle in Houston.

Nonetheless, American Tower has an office in the corporate corridor on Broken Sound Pkwy. where GTP was located after the company acquired GTP in 2013 for $3.3 billion.

Following GTP’s sale, Senior Vice President of Mergers and Acquisitions Dagan Kasavana founded Phoenix Tower International and situated his corporate office off of Yamato Rd. in 2013. The company recently acquired the rights to 600 T-Mobile sites for an undisclosed amount.

Crown Castle also has an office on Congress Ave. 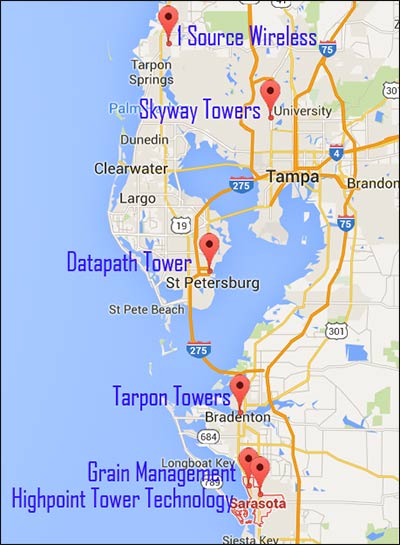 Florida is also home to a number of other tower consolidators. Tarpon Towers ll, located in Bradenton, owns approximately 32 towers, according to the FCC’s database, and was founded by Ronald Bizick, ll. Bizick was the Executive VP and COO of Global Signal, but prior to that held the same position at SBA Communications.

Tower owner Grain Management, with 151 company-owned towers, located in Sarasota, was founded by David J. Grain. He previously served as the President of Global Signal until it was sold to Crown Castle International in 2006 for $5.7 billion.

Two smaller tower owners are also located in Florida. Highpoint Tower Technology, located in Sarasota, owns approximately 15 towers and Datapath Tower of St. Petersburg states on their website that they also have 15 structures.

Another major hub for tower companies is in Cary, N.C.