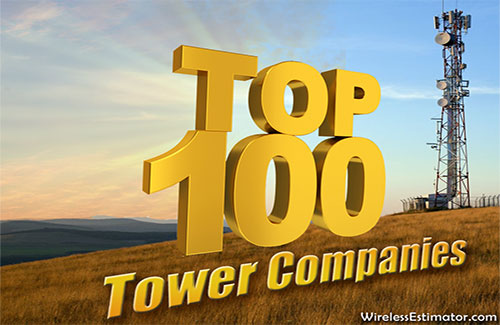 Although first place American Tower is slightly ahead of Crown in the Top 100 U.S. Tower Companies list by less than 200 towers, it is an amount that could be quickly topped if Crown picks up the assets of one of 26 other top tower owners, or has an accelerated build program.

If, however, Crown or American Tower were to acquire United States Cellular’s towers, if the carrier decides to cash in on its assets, the victor would hold the lead for some time since U.S. Cellular owns 4,207 towers, an amount eclipsing its nearest two competitors, Vertical Bridge at 2,864 and Insite Towers which has approximately 1,100 towers.

Other major carriers have sold their structures, but still maintain a small complement of towers that for lease and other restrictions could not be included when they sold their portfolios.

The year’s largest deal occurred in February when American Tower acquired the rights to approximately 11,300 Verizon towers for $5 billion.

The terms of their agreement include American Tower having the exclusive right to lease and operate the Verizon towers for about 28 years. American Tower will also have purchase options for the towers, which will be based on the fair market value of the towers at the end of the lease.

The next biggest single buy occurred earlier this month, putting Phoenix Tower International into 10th place when the company acquired the ownership or management rights to approximately 600 communication tower sites. Although Phoenix had other international sites, its portfolio in the U.S. was only 20 towers, according to a company executive.

The T-Mobile towers were sites that, through lease terms or other agreements, could not be sold in 2012 when Crown Castle acquired T-Mobile’s 7,200 towers for $2.4 billion.

Some smaller tower companies were dropped off the list, after the required minimum of 10 company-owned sites fell after they sold a few of their assets to other consolidators.

In addition to the tower company’s list being easily sortable, the page also provides insightful news stories regarding the changing acquisition environment.

About Top 100 Tower Companies – Total does not include foreign-owned tower portfolios. In some cases the tower company might not own the structure, but has lease rights and the ability to acquire the towers after a set period of time. Totals do not include DAS and small cells.

If you are a representative of a tower company and have additional updates to your total tower count, or if you are not listed and have 10 towers or more, please contact info@wirelessestimator.com. You cannot republish this information without obtaining permission from WirelessEstimator.com, and only the Top 10 Companies can be published along with WirelessEstimator.com as the source of the information.