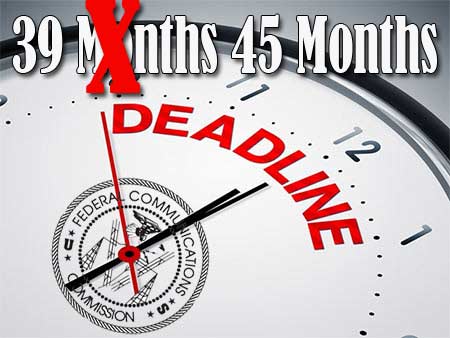 Wheeler, along with his fellow commissioners, said that the FCC would not force broadcasters off the air who missed the 39-month repacking deadline for moving to new channels.

Wheeler said that the deadline was not a “drop off the edge of the table” situation, since there was an extra six months built into the post auction deadline and the FCC would work with broadcasters. However a recent report from Digital Tech Consulting, commissioned by the National Association of Broadcasters (NAB), states that the work could take up to 11 years if a full complement of broadcasters participate I the repacking.

Justifying the now 45-month completion timeframe, Wheeler noted that the NAB had suggested that they only needed 30 months for the transition.

However, the NAB fired back with a denial stating that Wheeler was misguided and his statement didn’t tell the full story.

“In its initial comments in January 2013, NAB argued that the FCC’s proposal setting a repacking deadline of 18 months was misguided. We asserted that the FCC would need at least 30 months for repacking, and that it should use the $1.75 billion relocation fund as a budget for repacking – estimating that could cover 400-500 stations. Since that time, three things have happened,” the FCC said in its statement.

“First, the FCC has released repacking simulations suggesting that well over a thousand stations (more than twice as many as anyone anticipated) could need to move. Second, the FCC adopted a hard deadline for all stations to move, which surprisingly would force them off the air regardless of circumstances. Third, NAB undertook a study earlier this year – the first of its kind – that analyzed how long it would take to conduct a nationwide repack. We shared this study with the FCC a number of months ago. Both the scope of repacking and the consequences for broadcasters unable to move are radically different than proposed or contemplated in the record.”