Emmett Benjamin “Jay” Kitchen, 70, one of the industry’s first and most respected advocates for a wireless America, passed away on Dec. 13, 2015 after battling Parkinson’s disease for 16 years. 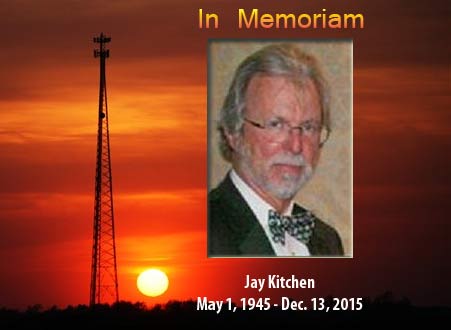 When Kitchen took over leadership of the Personal Communications Industry Association (PCIA) in 1994, he hit the ground running and put the organization structure in place to help win the spectrum allocations that launched the nation’s broadband and narrowband PCS industries, and successfully fought for deregulation and free-market competition.

“His tireless work and dedication to this association and the entire wireless sector deserves the utmost respect and appreciation. Our thoughts are with Jay’s family and friends, and to everyone who was inspired by his hard work and commitment to excellence,” said Jonathan Adelstein, President and CEO of PCIA – The Wireless Infrastructure Association, in a statement.

Prior to assuming the presidency at PCIA, Kitchen spent 17 years at the National Association for Business and Educational Radio (NABER) where he served as the organization’s vice president and president.  Following the merger of NABER and PCIA in 1993, Kitchen shepherded the organization during its busiest growth.

Michael Fitch, who took over PCIA as its president and CEO in 2005, was saddened by Kitchen’s passing, recalling the many positions Kitchen held that allowed him to shape America’s wireless future.

“Jay played many critical roles in and on behalf of the wireless industry. He was senior advisor to Commissioners at the FCC, the CEO of NABER, and the CEO of PCIA. He led the successful initiative to broaden both the spectrum available and companies competing in the commercial wireless industry through establishment of the PCS bands. He had excellent technical, managerial, and political expertise, and was a friend to people throughout the industry,” said Fitch.

Kitchen, of Alexandria, Va. and Palm Island, Fla. died at his Palm Island home under the care of Tidwell Hospice in his home with his wife, Kim, and his caretaker and friend David Farrall at his side.

He was born in Washington D.C., May 1, 1945 to the late Virginia and Ben Kitchen of Silver Spring, Md.May

Kitchen was a graduate of Virginia Technological University with a degree in Electrical Engineering. He started his career at the Federal Communications Commission (FCC) and served as a Wireless Telecom Policy Adviser. He was a Fellow of the Radio Club of America and a past member of their board. He had retired from the Wireless Industry after 36 years. In 2007, Jay was inducted into The Wireless History Foundation “Hall of Fame”.

He enjoyed traveling the globe, scuba diving, skiing and had a passion for trains, both large and small, from the garden scale to the real thing.