A husband and wife team from Gilbert, Ariz. that caused millions of dollars in losses to carriers as well as a seven-hour service disruption in Cincinnati, Ohio, were caught after a ping from a cell tower eventually brought them down because Cincinnati police had been tracking their phone. 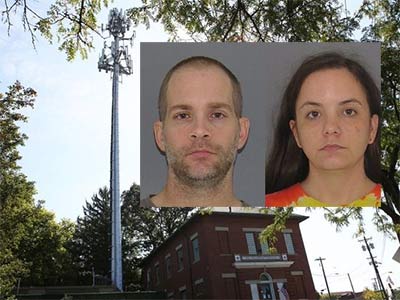 Instead of standing by her man, Rachel Cowan stood lookout for her man, but she and Michael were finally arrested after a multi-state battery theft spree which included backup batteries from this monopole in Cincinnati

Police say that Rachael and Michael Cowan went on a battery stealing spree that stretched from Ohio to North Dakota and triggered a power surge that caused an interruption in a southeast Indiana mobile network for seven hours.

Michael Cowan, a former cell site technician, would use gate combinations and other codes to thwart carriers from immediately knowing there was a problem, and would steal backup batteries while his wife served as a lookout.

He was arrested in North Dakota and returned to Ohio where he and his wife both face seven counts of fifth-degree felony and theft and one charge of fourth-degree felony disruption of public services.

If found guilty of all charges, they each face up to 13 years in prison, according to Cincinnati.com.