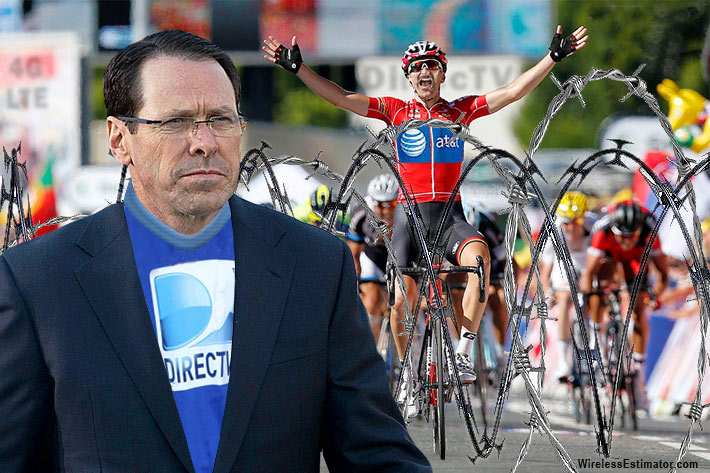 AT&T Mobility was racing to build out its network and trying to obtain 1,000 dedicated installation crews when AT&T CEO Randall Stephenson put up a major obstruction to construction by freezing additional wireless development in May of 2014 after he announced that AT&T was buying DirecTV for $48.5 billion. The deal closed in July, and it’s possible that AT&T will break lose with enough capex to shore up its flagging wireless business and the industry in general, according to analyst John Celentano.

By John Celentano
AT&T’s capital expenditures (capex) have been in the tank for the past year, and tower owners and installation contractors along with the original equipment manufacturers that support AT&T’s network all continue to feel the pain of the company’s significant capex cutbacks since mid-2014.

Many marketers across the supply chain still are trying to comprehend the depth and breadth of that pain, or how long it might persist.

The good news is that AT&T appears to be turning the corner on its capital spending now that its major acquisitions of DIRECTV in the U.S., and Iusacell and Nextel wireless networks in Mexico, have closed.

The acquisitions, however, mask the brutal reality that AT&T’s core wireless and wireline businesses are under pressure, meaning, revenue growth is slowing. 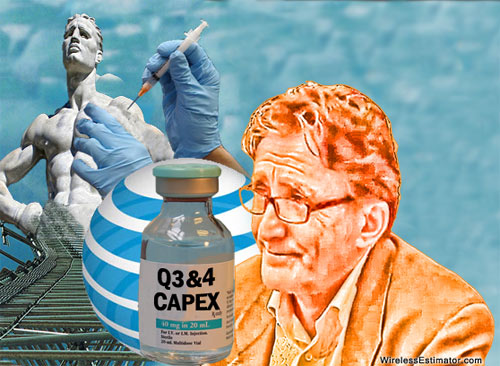 We believe that this situation leaves AT&T with few options. The company must continue investing heavily in its wireless and wireline network infrastructure to deliver the high-speed data and video services that its customers want, or risk flight of those customers to competitors.

This article provides some ‘not-available-anywhere-else’ insights on AT&T’s capital spending that you can factor into your strategic marketing plans.

Consolidated operating revenues were up +18% quarter-to-quarter (QtQ) mainly on the big contribution from DIRECTV whose results are now incorporated into AT&T’s financial reporting.

This is a welcome boost since AT&T’s top-line revenues essentially have been flat for nearly two years. Consolidated operating expenses were up +22% QtQ. The company still delivered net income of $3.078 billion, although that figure was down -3% QtQ from $3.184 billion and down -3% on a year-to-year (YtY) basis from $3.187 billion in 3Q14.

Wireline is not a pretty sight either. AT&T renamed its Wireline segment as Entertainment and Internet Services (EIS) that now includes DIRECTV. The addition of nearly 20 million DIRECTV subscribers offsets continuing voice, broadband and video line losses in AT&T’s legacy telco business. Without the DIRECTV subs, AT&T’s U-verse video services declined-2% QtQ and were flat on a YtY basis. Broadband connections were down -1% for the quarter and down -1% YtY. Voice landlines continue to erode with a -3% decline in the quarter, and down -13% YtY from the same period a year ago.

The good news for suppliers is that AT&T reaffirmed its guidance for full-year 2015 total capital expenditures (capex) at $21 billion, up $3 billion from previously-stated $18 billion. This revised level is consistent with AT&T’s overall capex for 2013 and 2014.

By reaffirming its guidance, AT&T is committing more money towards its Wireless and EIS networks after four consecutive quarters of constrained spending. 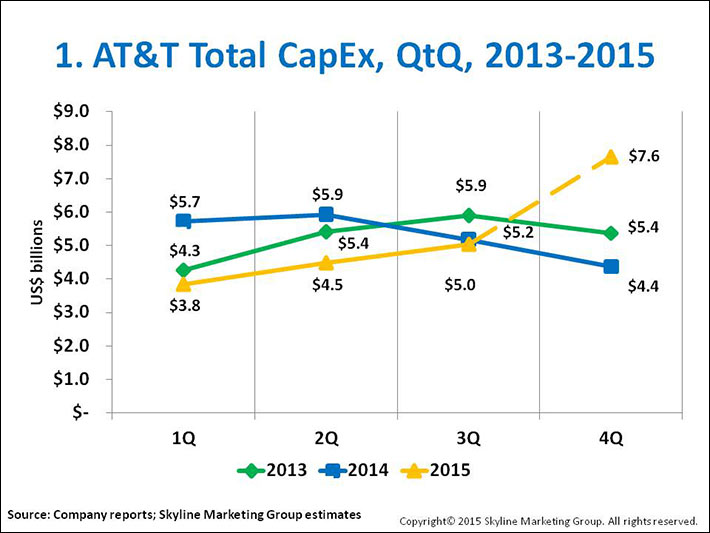 Much of AT&T’s capex growth in 2013 was the result of the company’s ambitious Project Velocity IP (VIP) initiative, announced in November 2012, to expand its broadband footprint across its operating territory in both its Wireline and Wireless networks. AT&T budgeted Project VIP at $14 billion over the 2013-2015 period.

At that point, AT&T declared that its investment in Project VIP had peaked. Its fixed broadband access deployments and LTE expansions were on, or ahead of, plan, so the company scaled back its capex. Buzz around the industry was that AT&T’s capital was stretched and that it was conserving capital to complete the Mexico wireless and DIRECTV acquisitions. Regardless of the particulars, AT&T did not scale back gradually, rather it throttled back sharply.

Much to the supply chain’s dismay, the nosedive continued into 1Q15 when overall quarterly capex dropped another -12% to $3.8 billion, its lowest level in the past five years. Capex-to-revenue slid further to 12%.

3Q15 results, announced on October 22, showed a continued increase in spending to $5.0 billion, up +12% QtQ but down -3% YtY. Capex-to-revenue stabilized around 13%, still not indicative of expansion activity.

With its 3Q15 earnings report, AT&T reaffirmed its capex guidance of $21 billion across all of its operations for 2015. Through the first nine months, cumulative capex reached $13.3 billion or just 64% of the full-year guidance.

Certainly, a portion of that total will be directed at its wireless network upgrades in Mexico, and towards integrating DIRECTV into AT&T’s access and core network operations.

But large portions will flow into upgrades and expansions in both the AT&T Mobility and AT&T Telecom networks as the company accommodates growing volumes of mobile and fixed data and video traffic.

Wireless Story
Exhibit 2 shows AT&T Mobility’s actual quarterly capital expenditures in 2014 and 2015 year-to-date along with a projection for 4Q15. 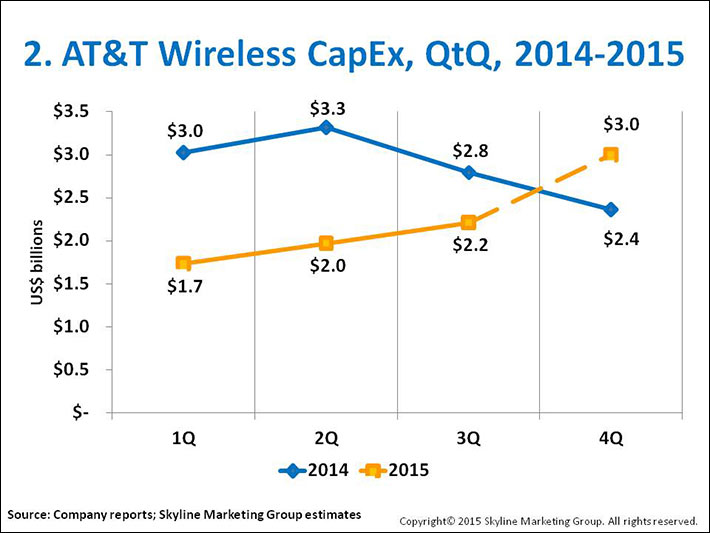 The chart is a subset of AT&T’s total capex gyrations over that period.

Wireless appears to have borne the brunt of the turn-down, however, mainly because AT&T’s wireless capex was running at such a high level for the past two years with its accelerated 4G LTE buildout. Over that period, wireless network investments included macrocells, distributed antenna systems (DAS) for many large venues, and small cell deployments.

Under Project VIP, AT&T announced that Wireless would absorb 60% of the $14 billion program over three years. That investment would encompass 10,000 macrocells, 1,000 DAS deployments and 40,000 small cell installations. A pretty ambitious plan, to say the least.

Following steady capex increases in 2013, 2014 started out with a bang.

Then the company slammed on the brakes.

Along with speculation about diverting capital for its acquisitions, some observers opined that the company was falling short of its Project VIP targets, especially, the 40,000 small cells, so it slowed its capital spending accordingly. For its part, AT&T stated that new cellsite installations were running ahead of schedule so it did not need to invest capital at the current run-rates.

The new year brought no relief.

AT&T cut quarterly capex again in 1Q15 by -27% to $1.7 billion. Through the downturn, capex-to-revenue dropped below the 15% marker down to the 12-13% range that reflects spending in a maintenance mode.

3Q15 wireless capex grew by another +12% to $2.2 billion. This increase suggests that AT&T is willing to invest the capital for network capacity needed to meet demand for mobile data traffic surges.

The outlook for 4Q15 is very encouraging for suppliers.

Based on current guidance, AT&T could allocate to wireless as much as $3.0 billion of 4Q15 capex. That’s a jump of +27% QtQ and would account for 36% of AT&T Mobility’s spending for the year, bringing the total to nearly $9.0 billion.

Note that this figure includes a portion for upgrades to AT&T’s wireless network in Mexico to support a $6 billion a year revenue stream, so we expect about 10-15% of the $3.0 billion will be spent on the Mexico network with the balance on the domestic network.

Whether this uptick presages AT&T’s wireless capex for 2016 remains to be seen.

Here’s the catch. Even with significant network investments, AT&T Mobility is experiencing service revenue declines, principally the result of bundled service packages it must offer to retain customers. To wit, post-paid average revenue per user (ARPU) is declining at -2% per quarter, now down to $57.05 in 3Q15 from $66.35 in 4Q13. The company is adding new subscribers each quarter but at a slowing rate.

Nonetheless, we think AT&T will resume its network investments consistent with historical levels to support the demand for faster and widespread mobile data connections including IoT and Connected cars.

Wireline Makeover
AT&T’s investment in its wireline network also decreased through 2014 before picking up again in 2015, as shown in Exhibit 3. 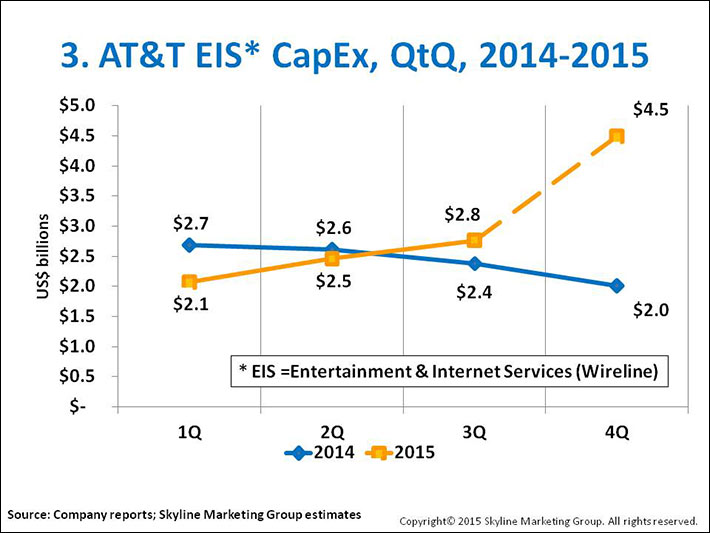 The company made a big commitment with Project VIP rollout in late 2012 with the goal of delivering IP Broadband to 57 million wireline customers.

By mid-2014, the company began winding down the planned U-verse market expansions and U-verse IP-DSLAM deployments. 2014 capex declined QtQ to bottom out at $2.0 billion by 4Q14. Through 3Q15, wireline capex grew steadily each quarter as AT&T completed and expanded IP Broadband upgrades to groom the network for the DIRECTV acquisition, expecting that video will be a big driver to new service revenues.

With its revised guidance, we expect that AT&T will adjust its wireline capex to support the revenue stream that DIRECTV brings to the new EIS business unit. Network investment in 4Q15 is expected to spike up to nearly $4.5 billion as AT&T integrates DIRECTV services and functionality with its core network capability and access platforms to handle the expected demand for bundled video and high-speed data services.

In the end, AT&T’s capex has a lot of moving parts, and figuring out what portion may be the addressable market for your products and services is a challenge.

John Celentano,  Skyline Marketing Group President, is a wireless infrastructure expert. With over 25 years in telecom in stints from systems engineering to product marketing, and equipment sales to strategic marketing, he understands well the challenges that service providers and their suppliers face in planning and deploying modern wireless networks efficiently and cost-effectively. John has a B.Eng in Electrical Engineering from McMaster University, and has studied Marketing at the University of California-Santa Barbara. He can be reached at jcelentano1@gmail.com.