Whether or not the industry this year is close to having no fatalities for the longest period of time since deaths have been accurately tracked since 2003 will not be known until the OSHA Austin, Tex. Area Office makes a decision as to whether 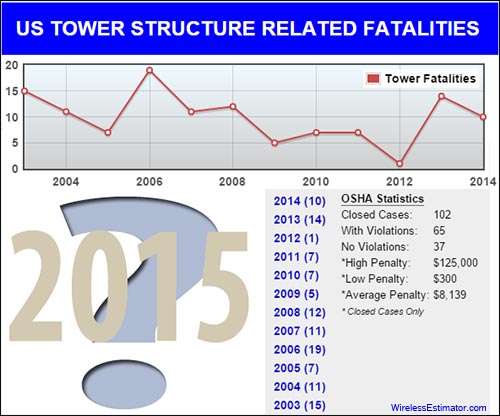 a fatality near Eden was training related or an unauthorized climb of a tower technician’s girlfriend.

On March 28, 2015, according to the Concho County Sheriff, 28-year-old Stephanie Gurney of San Angelo fell approximately 40’ off of an SBA Communications 500’ tower. Gurney was reportedly climbing with her boyfriend, Stephen Butler, who was employed by Jostan Communications of San Angelo.

A spokesperson for SBA had informed OSHA that no work was scheduled to be performed on the site on the day of the incident and they had not provided any authorization to use the facility for training.

OSHA opened an investigation on March 30, 2015 and completed their inspection and a closing conference with Jostan on the following day.

An OSHA spokesperson said that they could not provide additional details as to whether it was work-related and that the agency has six months from the date of the incident to provide a citation to Jostan, if it is decided that the activity was being performed under the request or authority of the tower contractor and there was a violation identified by the investigator.

Joseph Grimes, Jostan’s owner, informed Wireless Estimator today that he could not comment upon the investigation, but is waiting for OSHA’s determination.

The safest and longest period within the industry in the past 13 years occurred in 2012 when there was only one fatality which occurred on June 26 when a tower tech employed by Midwest Steeplejacks Inc. died.

The company contested the $25,500 in penalties, but agreed to a formal settlement for the same amount on Nov. 16, 2014. However, OSHA has not closed the case, according to their database.