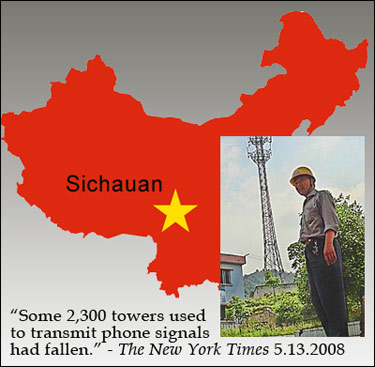 Although the Los Angeles study relied upon an article from The New York Times to provide empirical data as to what could happen in the U.S. if there was a serious earthquake, the statement that 2,300 cell towers had collapsed was incorrect. The above structure in Sichauan Province survived as did most of the area’s infrastructure. Wireless communications failed due to the lack of backup power supplies.

The Los Angeles City Council on Friday moved to require future cell phone towers to be designed and built with a 1.5 importance factor over the current design code, EIA/TIA-222-G, so that if there ever was a severe earthquake in the city, cell towers would “still be functional.”

However, their concern about the current code not being adequate was heavily based upon a news report from The New York Times, which said, “some 2,300 towers used to transmit phone signals had fallen,” after a 7.5 earthquake rocked China’s province in 2008.

It appears that Mayor Eric Garcetti’s science advisor on seismic activity, Dr. Lucy Jones with the U.S. Geological Survey, did not review additional articles that did not confuse “fallen” as implying a collapse, but that the towers were not operational due to mostly power failures and a lack of backup power supplies.

In fact, ten days later, according to a report from The Wall Street Journal, China Mobile reported that of their towers that were downed and damaged, 40% of them were back in service the first day and 77% were operational. Some of the towers that did collapse, according to further reports, were from landslides that would collapse a tower no matter how many importance factor multiples were used.

The proposal is up for a second round of voting on May 15, after which, if passed, it will go to the mayor for final approval.

The Resilience by Design report, as justification for its design increase, also pointed out an earthquake being responsible for “the collapse of the cell phone system in Haiti,” but it did not identify the number of towers that had collapsed.

In addition, according to a U.S. contractor that assisted in building out much of Haiti’s earlier wireless infrastructure, permitting was almost non-existent, and many of the foundations were “designed on a napkin.”

According to Jones’ report, retrofitting existing towers to a higher seismic standard can be expensive, with costs estimated to be as expensive as a new tower, according to the Los Angeles Bureau of Engineering. The agency said building new towers to a higher standard is much more practical, resulting in an additional cost of 10-20%, but the bureau did not state how they arrived at that evaluation.

The current earthquake minimum and maximum design for towers in Los Angeles are: 0.6 and 2.48 Ss.

According to TIA documents, the RS 222 committee is reviewing issues for Revision H which is expected to be completed by Spring 2016. Areas being considered for introduction or change are topography, mounts, potential fatigue, exposure and load factors, but the organization does not address earthquake design.

They are also looking at changing exposure definitions to be consistent with ASCE7-10, which includes evaluation of surface roughness.