An AM tower array that was designated to be an emergency broadcast station in the event of nuclear war, collapsed yesterday evening in Moore, Okla. after tornadoes ripped through the area, causing what the National Weather Service believes to be the first tornado fatality in 2015 in Sand Springs. 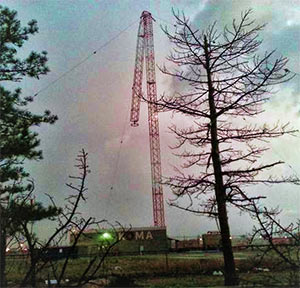 The three Blaw-Knox towers had been built to also support an emergency broadcast station housed three stories below the station’s transmitter building in case of a nuclear war.

Throughout the 1960s and 1970s, it was the home of KOMA, the definitive rock station.

The U.S. government built a three-story bomb-proof basement under the transmitter building with an emergency transmitter capable of feeding the three-tower directional system, or a single vertical tower in the event two of the structures were destroyed from a then omnipresent threat of a nuclear blast.

It also had a buried dipole in the event that all three structures were destroyed. The 700-foot trench running parallel to the towers is said to have been shored up on three sides with concrete and a wood cover that protected the four-foot wide enclosure that protected a thick steel cable running down the center that was suspended on insulators.

KOKC’s website is stating that their programming has been moved to 1560 AM until further notice.