Following a layoff of workers in December, Goodman Networks, a family-owned end-to-end wireless network deployment firm, let go an additional 340 employees on March 10, 2015, according to information reviewed by Wireless Estimator. It is not known, however, whether the downsizing was necessary due to a cutback in AT&T’s capex since a company spokesperson said Monday that Goodman Networks will not provide information as it relates to its customers or employee reductions. 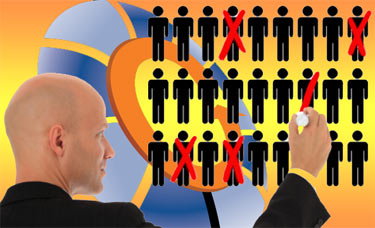 Although Goodman’s web site states that the Plano, Tex.-based company has 4,900 employees, and 340 terminations could be considered as an expected workforce adjustment due to business cycles, the layoffs appear to have been made primarily in Goodman’s wireless network division which employs approximately 1,900 employees or less, identifying it as a high 18% workforce reduction.

Goodman’s web site said it had 1,700 employees in 27 offices in September 2013, but it now states that there are 4,900 employees in 62 offices, the large increase coming from the company’s acquisition of Multiband in 2013, a company with 3,000 employees that primarily services DirecTV customers in 28 states.

Their DirecTV business appears to be prospering and Goodman last week was named DirecTV’s first-ever home service provider of the year for 2014.

But some projects were slowing in wireless on Sprint and AT&T contracts, according to company managers, and staffing revenues were losing pace with company projections.

Executive changes are numerous in past months
In December, Goodman appointed Ernie Carey as its new chief operating officer. Carey, who was previously AT&T’s senior vice president of construction, was seen by industry insiders as an excellent choice to further increase Multiband’s business after AT&T announced in May of 2014 that they signed an agreement to acquire DirecTV.

In addition, Carey’s ties at AT&T would most likely position the company as a key player in AT&T’s build-out and maintain its level of projects, even though the carrier had drastically cut its wireless capex spending immediately following the DirecTV merger announcement.

AT&T is Goodman’s largest customer. For the period from January 1, 2009 through June 30, 2014, according to a company filing, Goodman has generated approximately $2.73 billion of revenue from subsidiaries of AT&T Inc., including AT&T.

As part of the transition, the Board appointed Ron B. Hill, the company’s Chief Executive Officer and President, to that position.

Effective March 13, 2015, Craig E. Holmes tendered his resignation as Goodman’s Chief Financial Officer. The company said that Holmes’ departure was not the result of any disagreement with Goodman’s operations policies or practices. Holmes had held the position for three months. His annual salary was $350,000.

Managers were heavily cut in layoffs
Sixty-three construction managers, at an average age of 48 years, many of them employees for a number of years, were terminated. Thirty site acquisition personnel were also let go this month.

Employees were not given prior notice of their termination and were escorted from their offices or from their job sites on March 10, 2015.

The federal Worker Adjustment Retraining Notification Act (WARN), requiring employers to provide notice to employees 60 days in advance of mass layoffs if the employee reduction is 33% or more of all employees, was not mandatory for Goodman due to their 3,900 employee count.

Overtime lawsuit filed by construction managers
Last August, a class member lawsuit was filed against Goodman in Texas, demanding a jury trial, to decide whether a number of construction managers were due overtime pay for the hours they were required to work in excess of 40 hours per week.

The complaint, made by Louis Vassallo on behalf of himself and other plaintiffs, alleges that Goodman violated the Fair Labor Standards Act (FLSA) by requiring them to work six and seven days a week without paying them overtime.

The lawsuit reasons that the construction manager’s primary duty is “to inspect worksites and report to supervisors who hold decision making authority.”

The complaint said construction managers were required to work over 60 hours per week and they should be compensated for the overtime they should have received as well as liquidated damages and attorney’s fees.

The complaint is also asking for issuance of notice to all similarly situated construction managers during any portion of three years preceding the filing of the lawsuit.

Layoff severance would prevent employees from joining lawsuit
Dismissed workers were compensated for their accrued personal time off and final pay, and were also provided with two weeks of their regular weekly base salary as a severance payment.

However, some workers have not taken the severance package since it precludes them from ever recovering any money or other relief that they might be entitled to in a class action suit, and it waives their right to recover any money in connection with an administrative agency investigation.

The eight-page agreement also prevents the former employee from filing a lawsuit, discussing the agreement with the media, criticizing policies or practices of the company and its officers and employees, and many other restraints.

It also stops the employee from making any claims that they did not know or suspect existed in their favor when they signed the agreement.

In addition to the two weeks of severance pay, Goodman said following the signing of the agreement, the employee “may have the right to continue certain benefits pursuant to COBRA after the Separation Date…”, and “Company agrees it will not disparage or defame employee.”