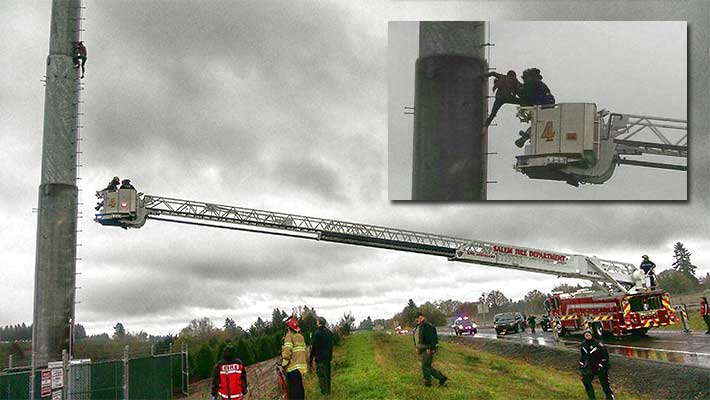 An alert Sheriff’s Office deputy noticed this teenage girl climbing a Crown Castle tower and his quick action might have prevented her from committing suicide.

At about 1:00 p.m. yesterday, Tooele County, Utah and Marion County, Oregon emergency services were called into action to save three people who needed their assistance at two tower sites. One weather-related incident could have been avoided, the other event was an unpredictable action taken by a teen that thought her only option to end her unsolvable problems was suicide.

According to the Marion County Sheriff’s Office, Deputy Andrew Derschon was shocked when he drove by a cell phone tower on Highway 22 near Joseph St. and saw a 17-year-old girl climbing the monopole.

Derschon turned back to contact the teen and she continued to climb.

Realizing she was making an attempt to take her own life Derschon began talking to the young woman as he called in additional Deputies and fire crews from Marion County and Salem.

Deputy Matt LaCrosse, a trained negotiator arrived on scene and within a short period of time he convinced the woman to climb to waiting fire personnel who assisted her down safely to the ground.

She was taken to Salem Hospital where she was met by mental health professionals and evaluated, according to a police report.

The 150-foot monopole is owned by Crown Castle, according to FCC records.

Flat Top Mountain in Utah has two communications towers near its summit. It is not known whether the men were working on one of these structures when they found that their helicopter wouldn’t start due to cold weather, and they had to be rescued.

Two Utah men rescued from a mountain top repeater site
Two men were rescued this morning at 1:00 a.m. after they contacted Toole County authorities and informed them 12 hours earlier that they had taken a helicopter to make repairs on a tower and were unable to take off again.

According to Tooele County Sheriff Paul Wimmer, two rescuers reached the two men but had to wait until the weather cleared so that another helicopter could bring them back down the mountain. He said that they were in “good health, good spirits,” but with “cold feet.”

The men were stranded after they landed on the mountain to perform some maintenance on an amateur radio repeater tower and were unable to take off again when their helicopter rotors froze.

Wimmer said the two men only planned to stay on the mountain for a short time and didn’t pack warm clothes or provisions to stay the night.

According to Wimmer in a news report, the pilot was in his 70s and the other worker is in his late 50s.

It is not known whether the men were tower contractor employees or ham radio operators. A call to authorities by Wireless Estimator for additional information was not immediately returned.

The Sinbad Desert Amateur Radio Club has a number of repeaters covering most of Eastern Utah.