On Aug. 31 and Sept. 1, 2015, Toronto, Canada building authorities closed off an area of the city’s financial district after they received reports of an ‘unstable’ antenna on 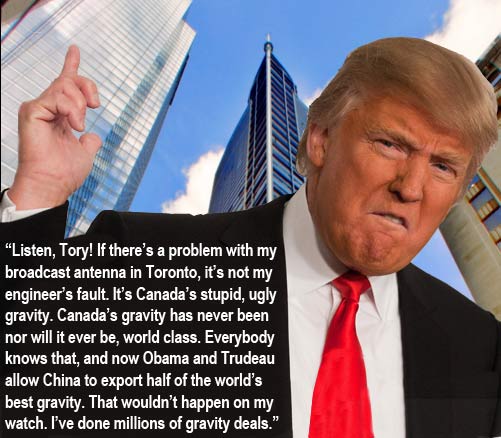 the Trump Tower. On Friday, the developer of Trump Tower, Talon International Development Inc., was handed a $2,000 bill from the city for the cost of closing off the
roads around the downtown high-rise.

However, structural engineers appear to be saying that it was much to do about nothing.

However, an industry worker told Wireless Estimator that he has seen masts sway considerable distances through vortex-shedding induced induced by wind vibration.

On Aug. 31, Toronto Fire Services were called to the Trump Tower after a maintenance crew was repairing some roof flashing near the structure’s base and said they saw the antenna swaying 4 feet. They contacted the building engineer who, according to the city’s report, also noted that it was swaying approximately 4 feet. He contacted the building security director who contacted emergency services.

But it’s questionable as to whether Talon should be responsible for that expense since the antenna spire was never unsound, according to Acting Chief Building Official John Heggie, who noted in his report that the maintenance workers were not supported by the finding of the professional engineers who deemed that the structure’s welds and building were safe, allowing city officials to re-open roads in the area.

“After reviewing the facts, Toronto Building and Legal Services staff believe that the city’s response (in closing off the area) was appropriate and necessary to satisfy municipal obligations set out in the Building Code Act for public safety,” the city’s report says.

It doesn’t state that they can pass on city services expenses to Talon. 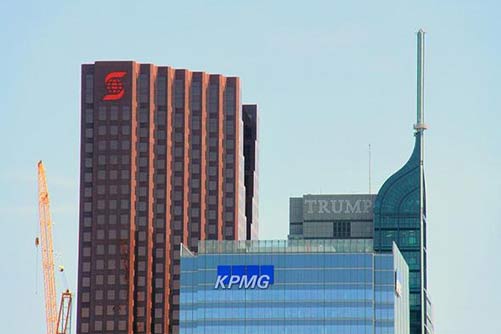 But Toronto City Mayor John Tory believes it’s allowable, even though engineers signed off that the structure was never unstable, and is concerned about the $2,000 invoice being too little.

“I wish we could sue them for the interruption to the economy and to the lives of people who work and live downtown,” he told NEWSTALK 1010. “We were told by the lawyers that we can’t. What we can do is bill them for our costs.”.

Heggie said in his report the process of providing the information to the city from Talon’s engineers was slowed because members of several engineering firms responsible for different parts of the spire had to be brought in, including one that travelled from Quebec.

They arrived on Sept. 1 and had to erect scaffolding to safely inspect the spire, creating further delays.

Tory took a swipe at the Trump organization, stating at a gathering, “I smiled a little a bit yesterday when I heard stabilization and Trump in the same sentence.”

It was one of many post-incident Donald Trump bashes regarding the incident.

One social media poster suggested that if the structure had been encapsulated with “Donald’s comb over spray,” it would never have a problem.